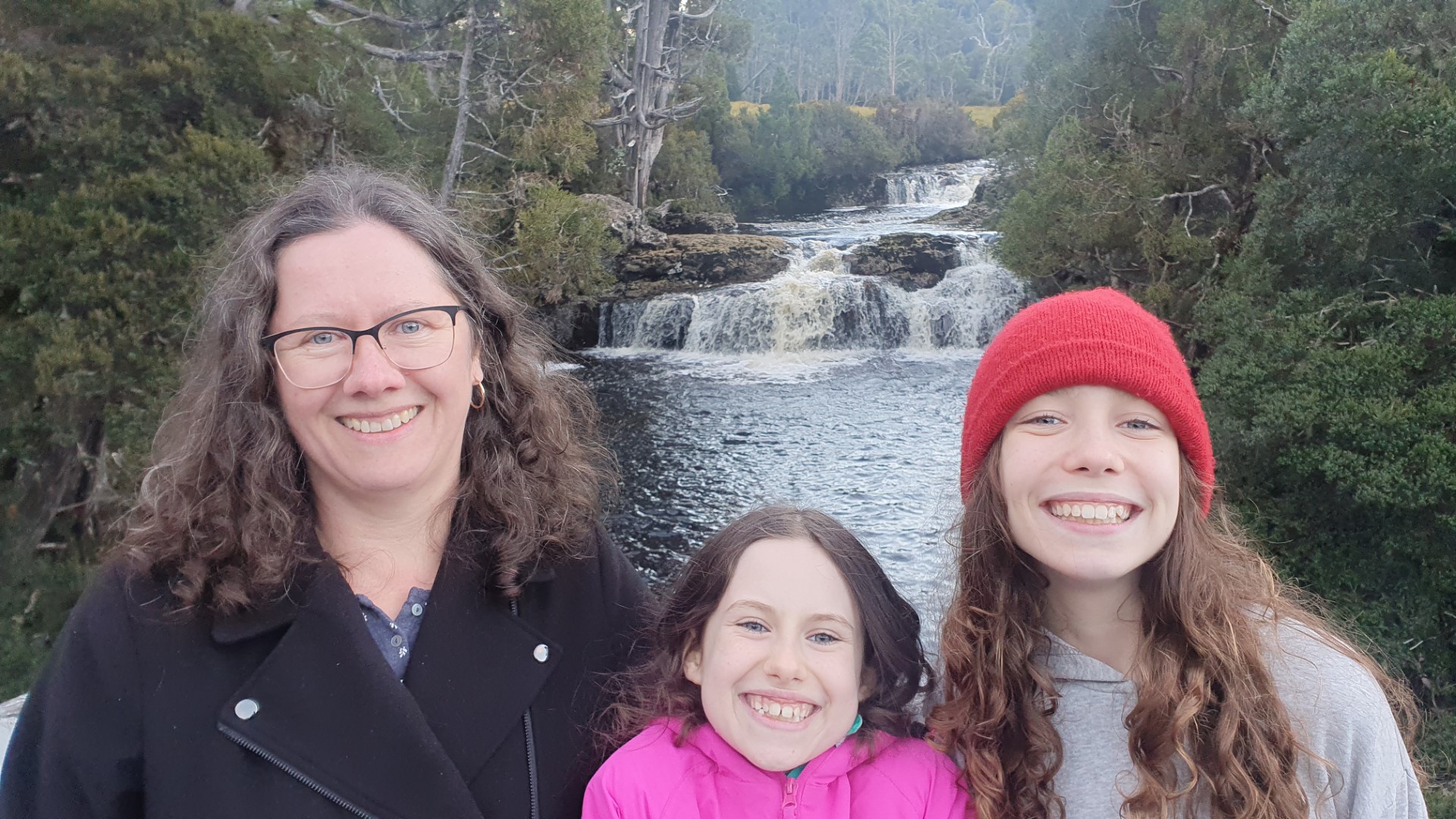 A slow casual packup as we’re not in any rush.

The sites are so small, and Caitlin’s new friends are parked to the edge of their site in front of us.  There’s no way I can get the van out to the right without taking out a tree or two, so we end up driving the wrong way out.

Out of Strahan and we make our way to Zeehan, Pete mentioned it was a much easier road than that to Queenstown and that turns out to be a bit of an understatement.  This was a great road.

In Zeehan we top up with fuel and take a drive up and down the town, boy has it seen better days.

Through Rosebery, and the sign into town advertises the local bakery, our hopes are dashed when we find out it closed… permanently….

Into Tullah and we stop at the local Café for lunch, it seems popular as there are a couple of vans and a few cars and motorcycles parked up.   It looks basic and quirky, but they have pies and a toastie for Caitlin.  We’re eating and we spot of all things an Alpaca looking over the fence.  “Cleveland” the Alpaca apparently.  He likes carrots and banana’s skin and all.

We turn off the north south highway and take the road to Cradle Mountain, about 20km later, we see a sign for a Cradle Mountain lookout, there’s enough space for the van so we pull over and walk the 200mts up to the summit of the hill.  Cradle Mountain is still some way off.  It’s at this point we realise it pretty damn chilly up here.  It was down to 1° the other night.

We arrive at the caravan park, it’s a Discovery Park, so kinda up there with the Big4’s but that means nothing here.  We had been warned that there was some expansion work and upgrades going on, but this looks like someone has just started excavating a road into the amazon jungle. I’ve been bogged on better roads.  We pull into our row of sites, and at least there appears to be power here.

After setup and a bit of a break, we drive over to the visitor’s centre, which we find is embarrassingly only about 500mts up the road.  I’d read that they are building a new viewing building at Dove Lake, to build it, they’ve used the land that what was the old carpark.  So, cars are now basically no longer allowed into the park.  They are running shuttle buses from the Visitor Centre through to Dove Lake, with a few stops in-between.   We collect our free bus ticket for tomorrow and check on the walks available.  The Dove Lake circuit was the main one on my list.

As we’ve still got an hour or two of light, we do drive the 1km or so, on to the interpretation Centre that is opposite Peppers Lodge, where we stayed last time.   As we’re driving, out of the corner of my eye I see what I think is a Wombat in the grass.  Sure enough it is, a quick U-Turn and we park up.   There in the middle of this grassy patch is the wombat just having a feed, we are 20-30mts away, but he couldn’t care less about us.  We try and get some good photos, but he seems mostly interested in showing us he’s butt.  They kids are pretty impressed to see one in the wild.

We continue on and park up at the Interpretation centre.  Here we take the Enchanted Walk.  A short loop up one side of the creek and back the other side.  Beautiful country.  A guy walking the other way mentioned they just saw a Platypus up near the bridge a few minutes ago.  We arrive and there’s no sign of one now.  Justine and I hunt and hunt over the bridge the whole way down the other side of the creek, but can’t see anything.  Towards the end we do see a Pademelon out feeding.

The walk ends up in the grounds of Peppers.  Justine, and the Kids walk over to the other side of the road and from the boardwalk they spot an Echidna.  Having said that, we did see one in Justine’s Mum’s garden last year, but this is still pretty special.   A little further on a 2nd wombat is eating.  Bummer not seeing a Platypus, but otherwise I’d call this a wildlife win.

Back to the van, and it bloody cold.  The fan heater is not going to cut it tonight, so as all the sites are spaced out, we fire up the diesel heater.  Unlike the fan heater, we’ll be able to leave this running all night.

While we had dinner of the BBQ, there is the flashed camp kitchen here.  It has a full-blown fireplace, as I walked by it was packed with people.  If I was sleeping in a converted Hiace, I’d be in there too.

As mentioned, there is a ton of construction going on here, hopefully tomorrow being Saturday they’ll take the weekend off.