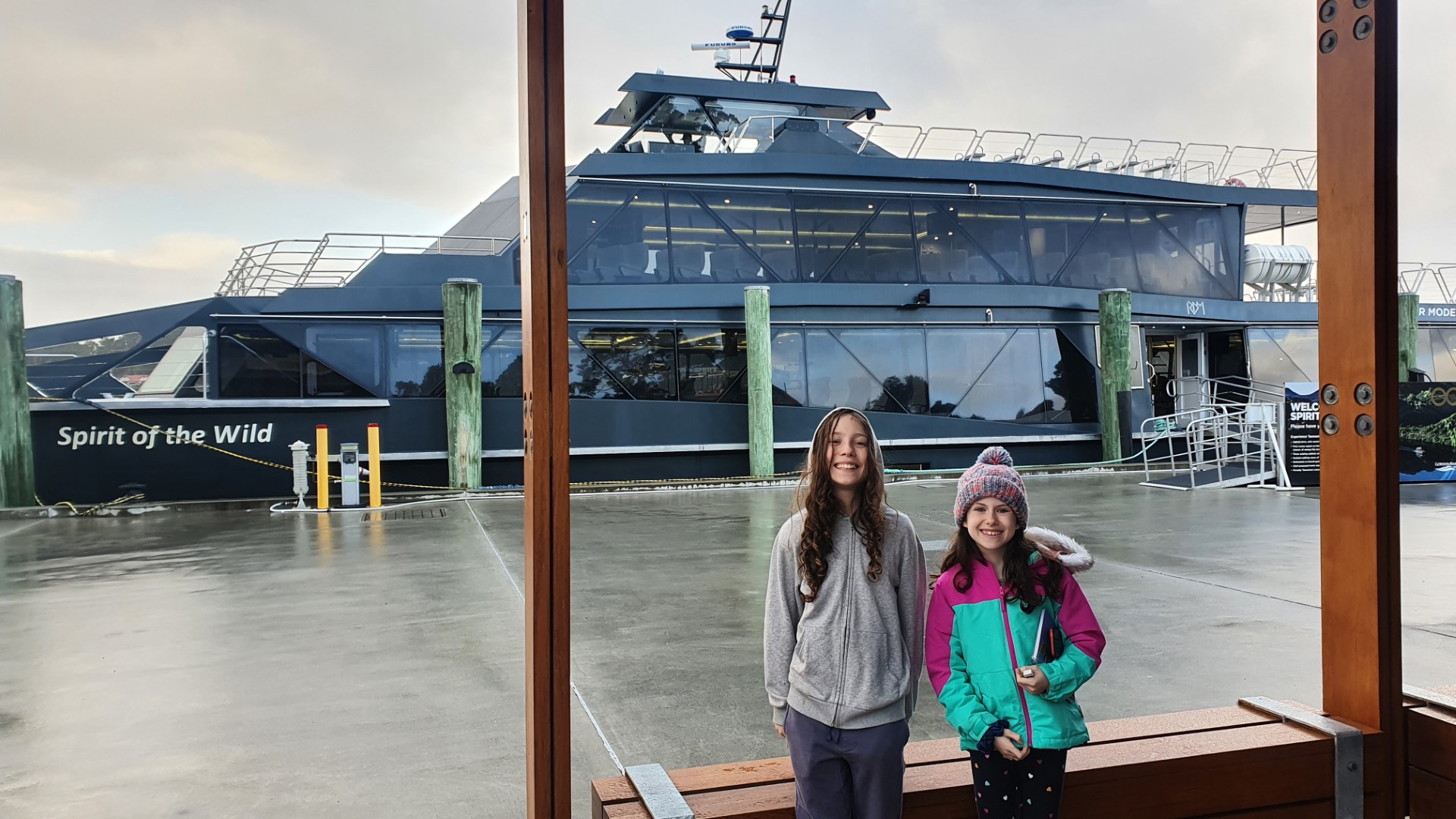 I may as well cut and paste the first paragraph from yesterday.  Rained overnight, restless sleep, early start……. We’re all caught up.

At least it’s only a 2-3min drive to the wharf.   Tickets collected we wait for 20mins or so for the boarding.   This time we get away pretty much on time at 8:30. It’s a pretty flash boat, it’s certainly been upgraded since we were last here.   Upstairs is the posh premium section which is priced to be un-kid friendly.  Hey who can blame them.  So we’re downstairs, but at least we have window seats.

A quiet punt out of the bay, then they hit the accelerator and make our way to Hells Gate, the opening of Macquarie Harbour into the Southern Ocean.  We drove over to the beach here on Tuesday afternoon.  So it’s really nice to see it from both perspectives.   To call this an opening is really overstating it.  This is the narrowest of opening I’ve seen on such a large harbour, less that 100mts across I’d say.  The front deck is already full, so I make my way up to the top deck to get a better view.  The captain guides the vessel out thought the heads and we continue a few 100mtrs before turning around.  The swell out here might only be 1-2mts but it’s so much more than what it was in the protected harbour.

Back though the heads and into the harbour. Then we motor towards the mouth of the Gordon river, along the way the drive by some Fish farming pens, mostly Salmon, with some Trout.  This was always presented as a green, clean, sustainable industry.  But a recent book by Richard Flannagan seems to have blown that image out of the water (so to speak).  I don’t know all the details (maybe plausible deniability?).  Without all the information, I don’t like to make too much comment.

As we approach the Gordon, I suggest we get up the front early to beat the rest of the crowd.  Already some people are starting to move.  We get a spot right up front, it’s damn cold but there’s no gain without pain.  Shortly after the front deck is packed.  Into the river and the boat shows its magic trick, the v10 diesels turn off and two 125kw electric motors kick in for this near silent cruise up the river.  Unfortunately, the river is not the mirror finish that it could be (and the brochures show!), but as we travel up river, we do get some really clear patches. After a K or so, the kids pike out and the cold beats them inside.  Justine and I hold out to enjoy the environment and a reminisce a little bit about our journey 20 years ago.

About half way up the river, it starts raining.  Softly at first, we retreat indoors, not long and its a bit of downpour.  It’s been a bit like that the last few days, this ain’t Melbourne, it’s not four seasons in one day, it only takes an hour here.  20 odd mins later we pull into the jetty at “Heritage Landing” is dry and the sun has come out.

A 500mtr or so walk though the rainforest, and a half decent talk by one of the boat crew.  It’s nice, and I get there needs to be a “destination”, but the Nelsons Falls or the walk at the end of the railway was every bit as good.  So for me at least it was a bit of “been there done that”.  Anyway 15min later and we’re back on the boat.

Like a plague of locust descending on the food.  Otherwise known as the Buffet lunch, OK, maybe that’s a bit dramatic.  The lunch was actually pretty good and enough for everyone.  It’s clever they do this in the calm of the river on the way back.

We make our way out of the river and head to Sarah Island.   Now this is not the Sarah Island I remembered, for starters it bigger (OK, that’s on me), but the whole thing seems to have become so much more commercial.   The walkways, rather than dirt tracks, are now all either gravel paths or elevated boardwalks.  I’m sure its to keep the hoards or tourists (of which we are ones) on the paths and off the ruins.  And the guide while good, just didn’t seem as authentic as I recall the last trip.   The groups just seemed larger too which didn’t help.  The story seemed to be a little different too, both had this as being a harsh, unforgiving place, but today’s trip seemed to soften up the latter years.  I’m not sure what the real story is.  At the end the tour guide lets us know she is also a cast member of the play “The Boat that Never Was” that runs most nights at an outdoor amphitheatre next to the information centre, of course the kids insist on going, we let them know it’s going to be cold but they seem determined.

Anyway back on board for the power home.  And we cruise back at about 27knots.  It’s a much quieter return journey as everyone seems a little tired after the days outing.  Once back at the dock, the kids are less sure about the play and we end up not booking.

Back to the van park. Some housekeeping, the kids go to the games room for a hour or so, and then Caitlin plays with some new friends that turn up in the site opposite.

Paul from yesterday comes over for a chat and a bevvie, but the dark and cold end the night.

Tomorrow should be a more relaxed day.