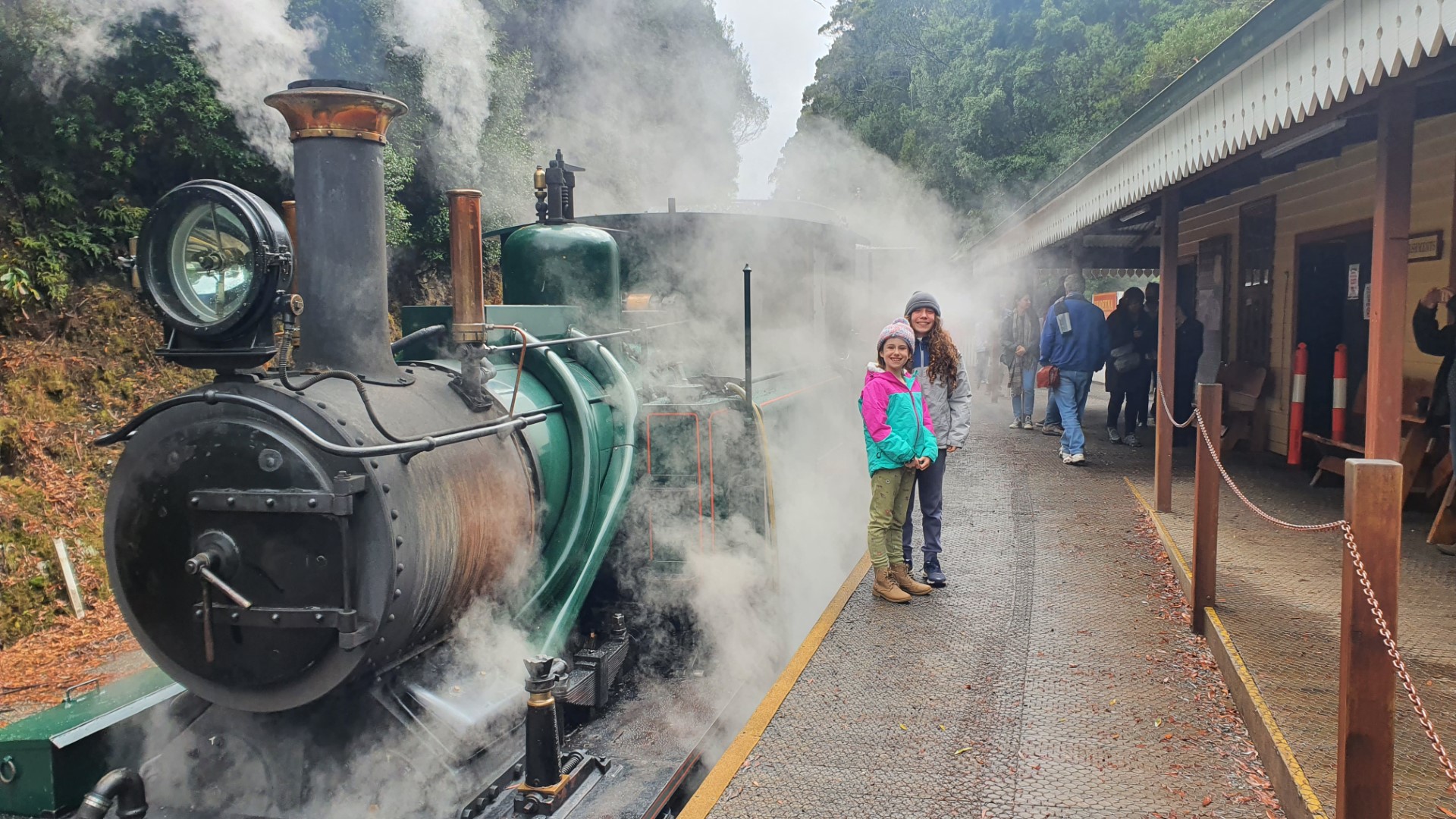 Alarm off at 6:30, although both Justine and I have had a restless sleep, probably the knowledge of an early start.  It’s also been raining on and off all night which hasn’t helped.

So the plan is to drive back the 40odd K’s to Queenstown.  I’d ummed and arrhed about staying last night in Queenstown when planning this part of the trip.  But to get to Strahan for the boat tomorrow, would mean packing and hitching up and then finding somewhere to park the van in Queenstown.  I thought it would be just as easy to carry on to Strahan and backtrack with just the car this morning, neither are great options.  So here we are.

The road is so windy, at least we don’t have the van on.  We arrive right on 8:15, grab the tickets and have a proper breakfast in the café of the train, while a little expensive, it was pretty good.

There are three carriages, two for us commoners, and one for the rich people (or those without kids), all behind the cutest of steam trains.  We board at 9:00, and wait.  We finally pull out around 9:30. So, 9 doesn’t really mean 9 then huh?   We advised the carriage is air conditioned, but there are blankets.  The AC is very small so the blankets come out pretty quickly.

The first 5-10mins we ride through the streets of Queenstown, I didn’t realise the town went this far west.  A few locals come out to wave, I would have thought they would have been jack of it by now.  Some little tacker seems to have just come out of the shower with a towel rapped around him to wave hello, that’s keen.

We trundle along for maybe another 15 or so mins and stop at Lynchford.  We walk out the back of the station and they have this gold panning setup.  Very elaborate tiered, troughs, so no need to bend over or get dirty.  Apparently, they sprinkle in a few grains of gold in every once in a while, and one kid does eventually find a fleck, much to Caitlin displeasure.  While we’re here it starts to pour, but luckily, we’re under a tin roof.

From here we hit the mountains and the railway’s unique rack and pinion system comes into play.  We can hear the loco struggling as we slowly climb a 1 in 16 grade to the top and Rinadeena Station.  Another stop for 20mins or so.  Along the way we’re told how the railway was built to support the copper mine as there were no roads at the time.

Then we start the downhill run, that also needs the Rack and Pinion, this time to slow us down.  We make our way to Dubbil Barril (Double Barrel) and as far as we go on this trip.  Here they detach the loco from the front, reverse it to the other end where it is turned around on a manual turntable and then reattached at what was the rear. There is short walk through the rainforest here too which is pretty nice.

On the return, everyone swaps sides of the carriage so you get the view from the other side, opposite us has have been two elderly ladies from Adelaide, quite nice and seem to have a good sense of humour.

We stop for a bit at Rinadeena again, but just as we arrive it starts to rain, so other than grabbing a quick photo from the bridge, we stay in the carriage.

Though Lynchford and back into Queenstown.  Oddly there seems to be quite a few people here, so we’re not sure if there is another trip on today.  Surely it’s too late for the same run.

While it is one of those cookie cutter tours, it was good, so glad we’ve done it and worth the expense.  Not sure I’d race back and do it again soon, but certainly worthwhile.

Justine drives on the way back, so this is her first extended drive this trip, I’ve worked out I’m not a great passenger on these windy roads and would prefer to be the driver.  Next time I might need to take some ginger tablets.  One really odd thing on the way back, We round this bend and there is something on the road, but it’s moving, a small possum??, no, it looks like a yabby, I look at Justine, and she says, “was that a yabbie” the damn thing was crossing the road. Was it trying to be roadkill??? Bizarre….

We have a happy hour of sorts with an older couple who hail from the gold coast.  We met them when we parked up next to them in Lake St Clair a couple of nights ago.

Finally we’ve decided to go to the pub for dinner, the one at Regatta Point on the opposite side of the bay seems to have the better menu options.  We drive by the 2nd option in town and that looks packed, and when we arrive at the Regatta Pt Tavern, it seems we might be lucky to get a table,  but they squeeze us in.  Good, but not great meals, the poor staff are run off their heals.

Another early start tomorrow for the Gordon River Cruise, at least it’s in Strahan, but we need to be there by 8am