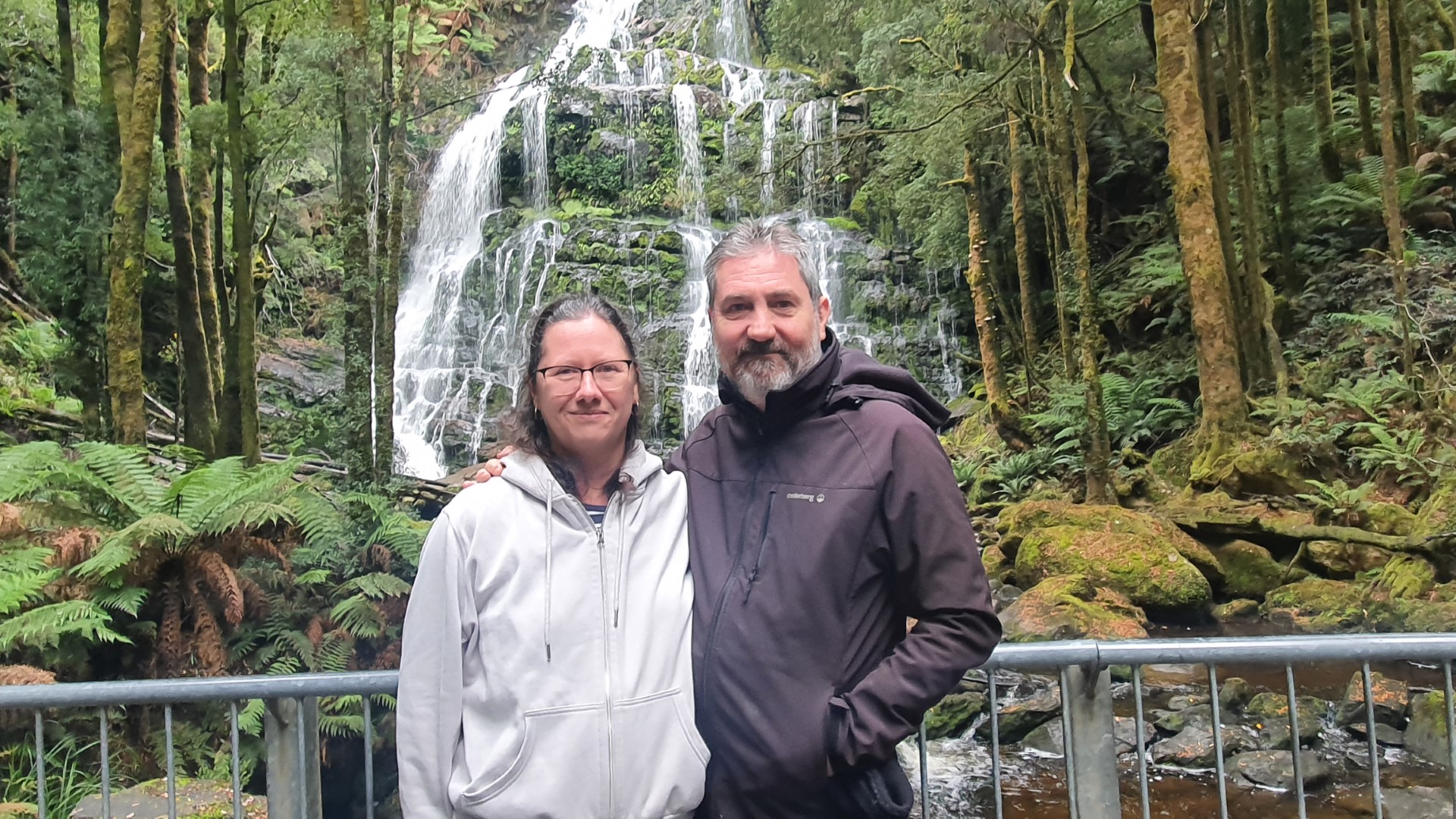 Cold alright, we didn’t want to run the diesel heater over night and for some reason the thermostat on the fan heater didn’t kick in.  In any case it was toasty in bed, but the thermometer on the wall is reading 4.   Having said that, with the placement, that is really the temperature of the van wall.

We’ve decided to have breakfast or more accurately brunch at the Hungry Wombat Café down at Derwent Bridge.  So we’re in no rush to get up (out of bed!).  Liam volunteers to turn the fan heater on.

Once the van warms up a bit, we get out of bed and get ready.  As we need to return the toilet key, we walk around to the lodge via the lake.  It’s cool, and there’s no wind out here this morning.  I was hoping the lake would have been stiller, but it still so pretty here.

Getting out of the site is fortunately a hell of a lot easier than it was to get into.

We drive back to the main road, and pull into the café, which is also the petrol station.  I need fuel, but I’ll fill up when we leave.   Into the café, only to realise they no longer do breakfasts, B&E rolls and pies and the like, but not what we’ve told the kids they should be able to have.  Apparently, the Lodge now includes breakfast, and as they are the main accommodation, there’s no market for it.  We were working of an old photo on google.  Mmmm

Anyway, fuelled up we start heading east.   It seems it’s going to be very windy; we give the kids some ginger tablets.   That proves to probably be a good idea, as the next 134km are going to be the windiest and hilliest of the trip yet.   It’s really fortunate that we don’t have too many cars come up behind us and the few that do, I’m able to find a spot to pull over without them being behind us for too long.

I see the sign for Nelson’s Falls, I recall this might be worth a look, so slow down and fortunately there is a place to pull the van over.   It ends up being a short walk, but wonderful.  The rainforest is spectacular and when we finally arrive at the waterfall, we’re not disappointed.  While the amount of water is probably the lowest it would be all year, the way it cascaded down all the different levels and the way the ferns and moss was growing in between individual streams was so unusual.   A great break from the drive.

We start the trip down into Queenstown.   The hills were not quite as bare as we recall them, but I’ve got to say that’s one steep descent.  I got the trailer brakes wound up and, on a few occasions, I need to lock the transmission into 1st gear.  I don’t recall needing to do that on any other decent, but we don’t want a repeat of the snowy mountain issue.

Into Queenstown, find a parking spot and look for a place for lunch.  It ends up being a bit easier than expected as other than the pubs there is only one place open.

Only 40 odd KM to go, but these are long K’s so it a huge relief for all when we make it into Strahan.  Into the caravan park and while not quite so bad, they do give the sites at Lake St Clair a run for their money.  A lot of van parks here are really made for campervans and motorhomes not a car and a caravan, well at least not a van made this century.

Setup and with a couple of hours of light, I make a captains call and force everyone for a drive over to Macquarie Heads, I partially want to look at campground there, but you can drive up the beach here so I thought it might be bit of fun.  Through the campground and while it looks OK, a lot of sites are waterlogged, and none really have any views, so the only benefit would be maybe a campfire.  So, moving in the next day or two probably does not seem worthwhile.  We eventually come to the end of the road, and a sign says “4wd access only”, lucky we brought one.  An embarrassingly easy 100mts or so and we on the beach just inside the heads.   We drive around the head and venture a few kms, up the beach.  I think there should be a track along here that will take us back to the road home.

We get 2, maybe 3km up, so far the sand has been pretty firm and the beach wide.  I haven’t dropped the tyre pressures yet.  But we can see up ahead the beach narrows, and the dunes start getting tall, those dunes that drop sharply to the beach and then are gone.  There’s no way I’d get inland on those, so plan to turn around.   We reach these tall dunes, I do a U turn and then right in front of us I can see a track off the beach, that was hidden on the way up.  It takes 2 attempts, but we’re off the beach.  Unfortunately, this leads to the narrowest of sandy goat tracks, probably make more for the many Quad bikes that are here than a large 4×4.  There’s no hope of turning around, and the duco is getting a work out with all the pine trees along the track.   Eventually after about 15 mins we finally find our way back to the main road.  The beach was 10 out of 10, but it’s minus several million points for this bush track.

Back at the caravan park, the car from the camper trailer next to us pulls in, a Ranger with the Victorian number plates “JUZTIN”.  After last night reservation effort this is priceless.   Justine and Justin have a bit of a laugh.

There is a creek, called Platypus Creek, that runs through the caravan park, so just before dark we take a walk along it.   Of course, no chance of actually seeing one, but it was a nice outing.

After dinner, we try and get an early night, as we’ve got an early start tomorrow