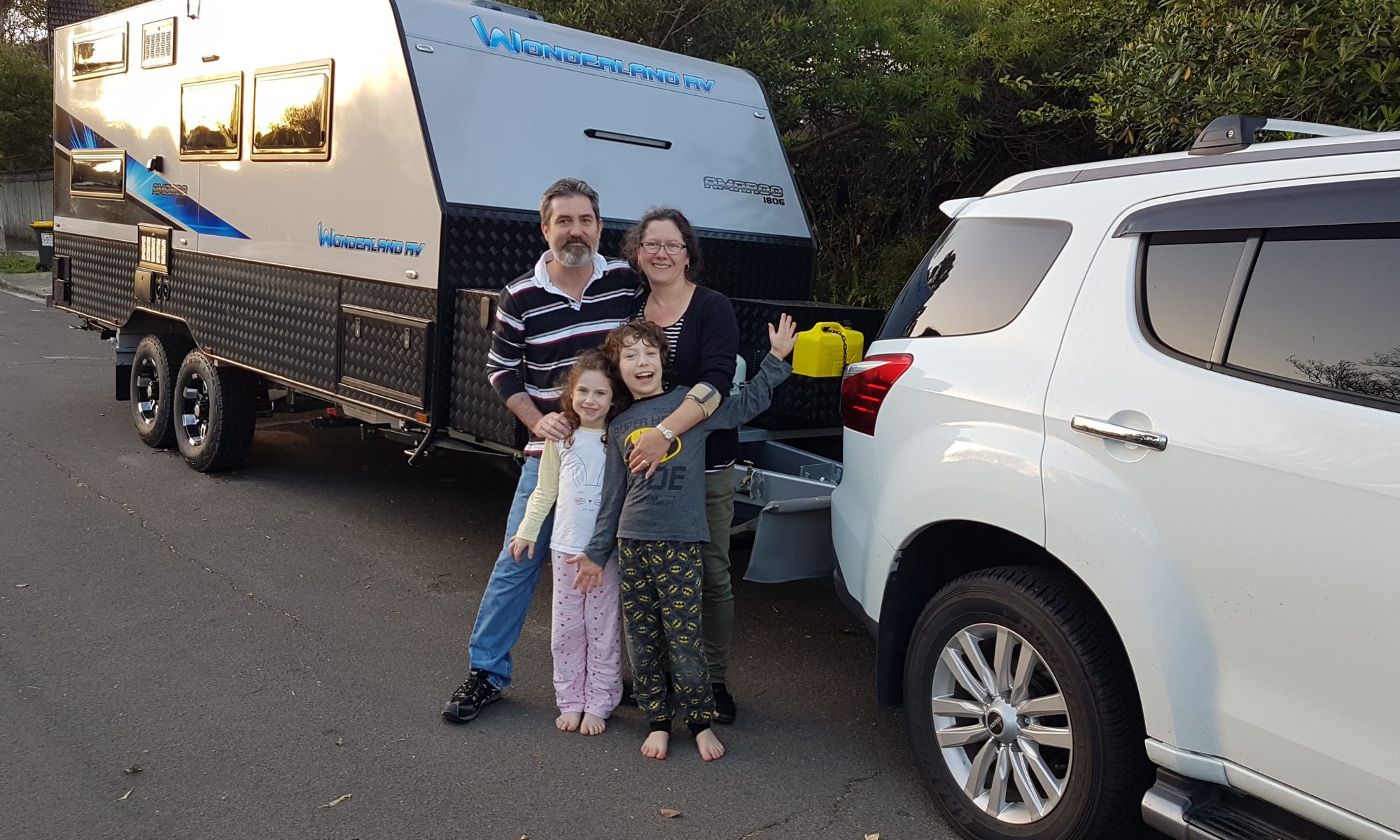 Up at 5:30, A final once over of the house…..Coffee….. We hitch-up, stow everything in the van. Two of our neighbours who are really good friends come over to say goodbye, a quick photo and we are ready to leave by 6:30.

I was hoping for a lot less traffic. It’s Sydney who was I kidding. Over the harbour bridge, I’m sure the lanes are smaller today. Soon we are on the M1 and getting used to the van again. We arrive on time at fivestar and let them look after the van.

END_OF_DOCUMENT_TOKEN_TO_BE_REPLACED 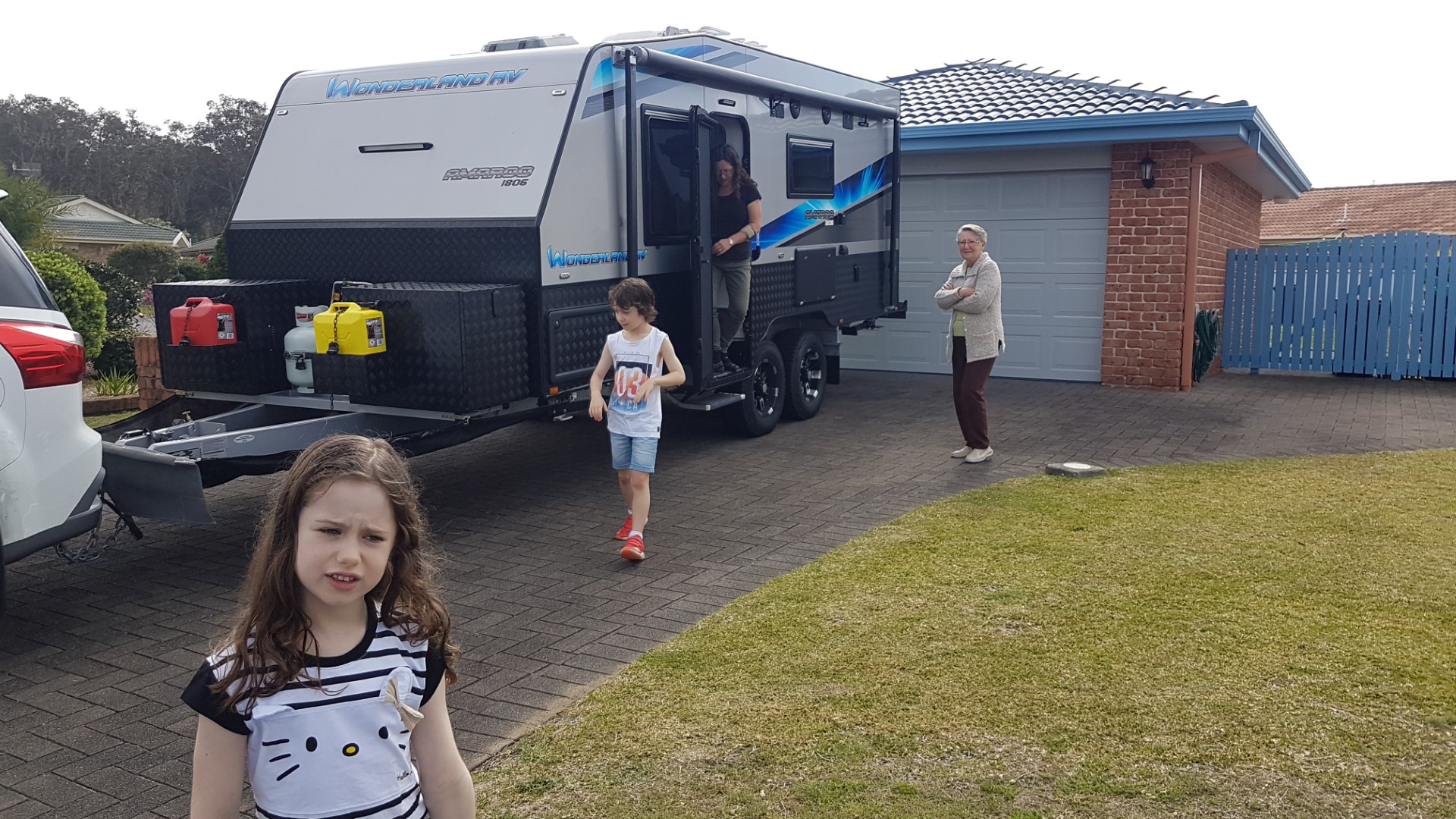 We Leave foster just as the fog lifts.

END_OF_DOCUMENT_TOKEN_TO_BE_REPLACED 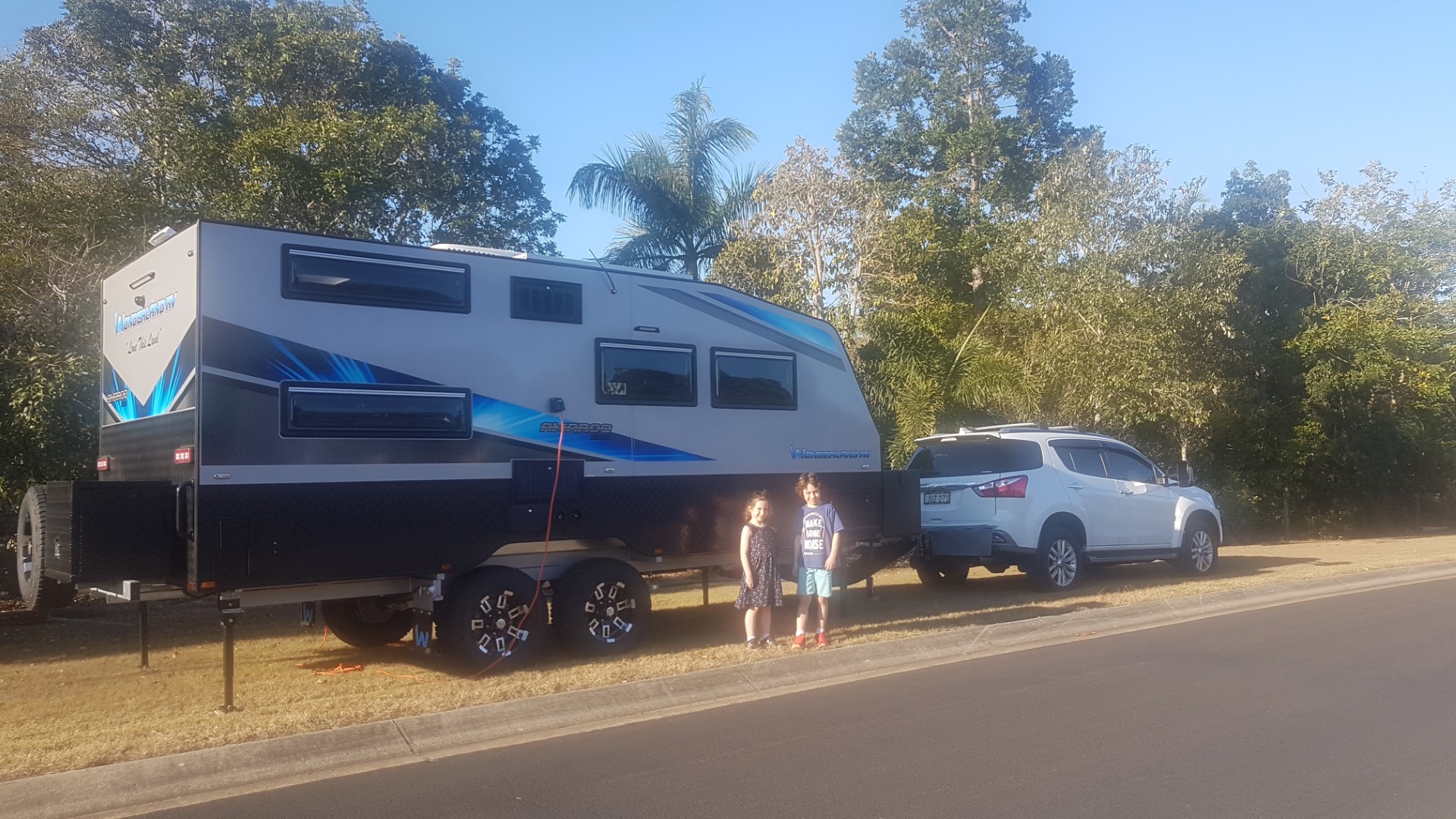 So after 1300km we are in Hervey Bay and we’ll stop here for a few days. Time to pack the van a little better and make sure we have everything we need.

END_OF_DOCUMENT_TOKEN_TO_BE_REPLACED 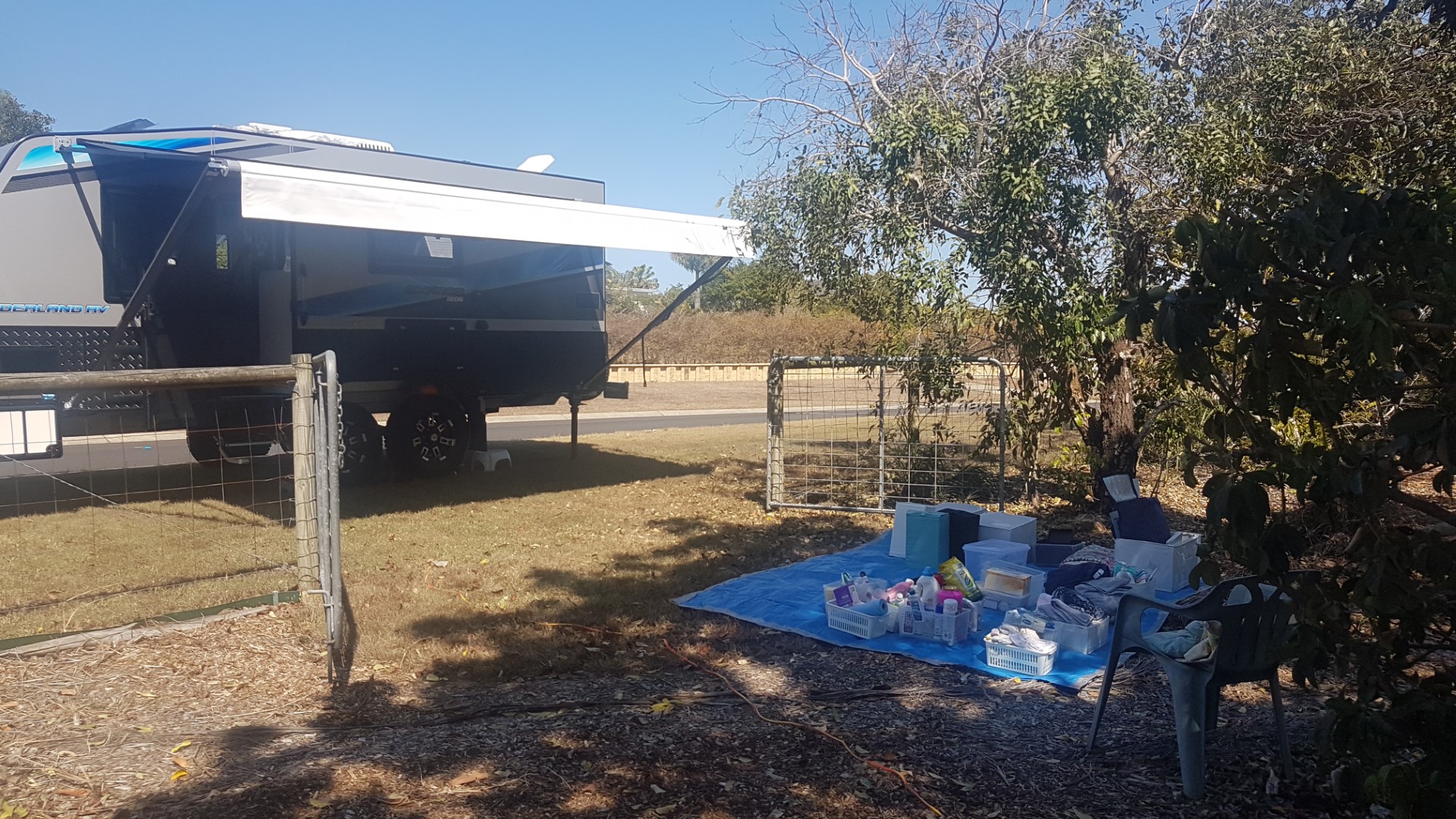 Given we needed to pack our cloths and things really quickly, with most of the effort going on clearing out the house, the inside of the van was not packed really well. So we dragged most of it out and started again, Given it is high 20’s here today and we are only going to get warmer, it seems we probably packed too much cold weather clothing, so we have separated these out and “filed” them. We have another problem though. We have more space than we have stuff to fill it with. This isn’t meant to happen in a van. Might need to go shopping tomorrow!

END_OF_DOCUMENT_TOKEN_TO_BE_REPLACED 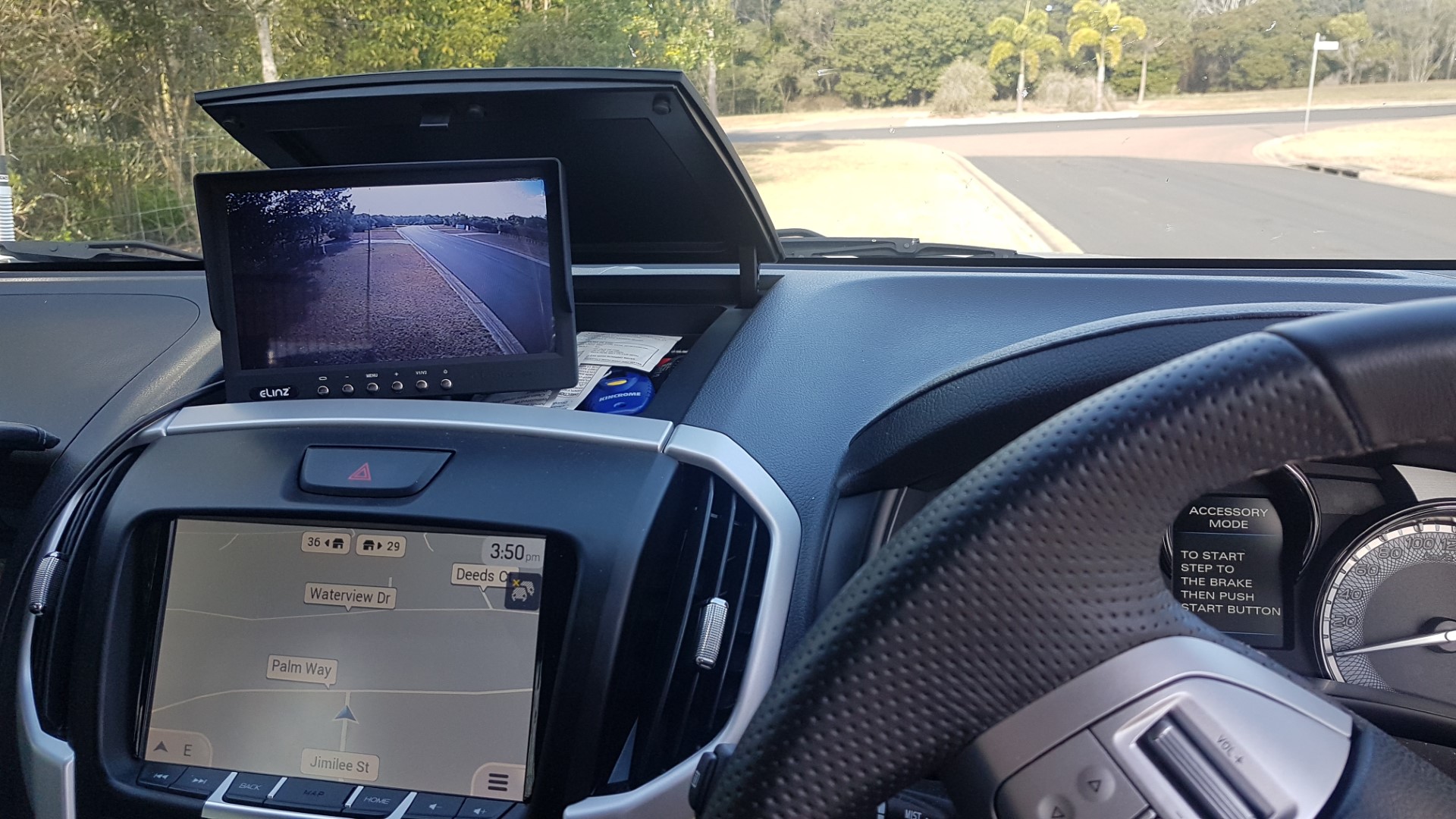 A bit of shopping today to get some last minute things and a couple of loads of washing.

Caitlin’s bunk bed can become a table, due to this it is a little more difficult to make, so Justine decided buy a thin mattress to go on top and we can make this. When we need to use the bunk as a table we can just move the made mattress up onto the top bunk. Only trouble is the standard size foam was too big, Clark Rubber cut the foam, but this left the cover too big. Justine’s mum has been drafted in to cut and sew the mattress cover smaller.

END_OF_DOCUMENT_TOKEN_TO_BE_REPLACED 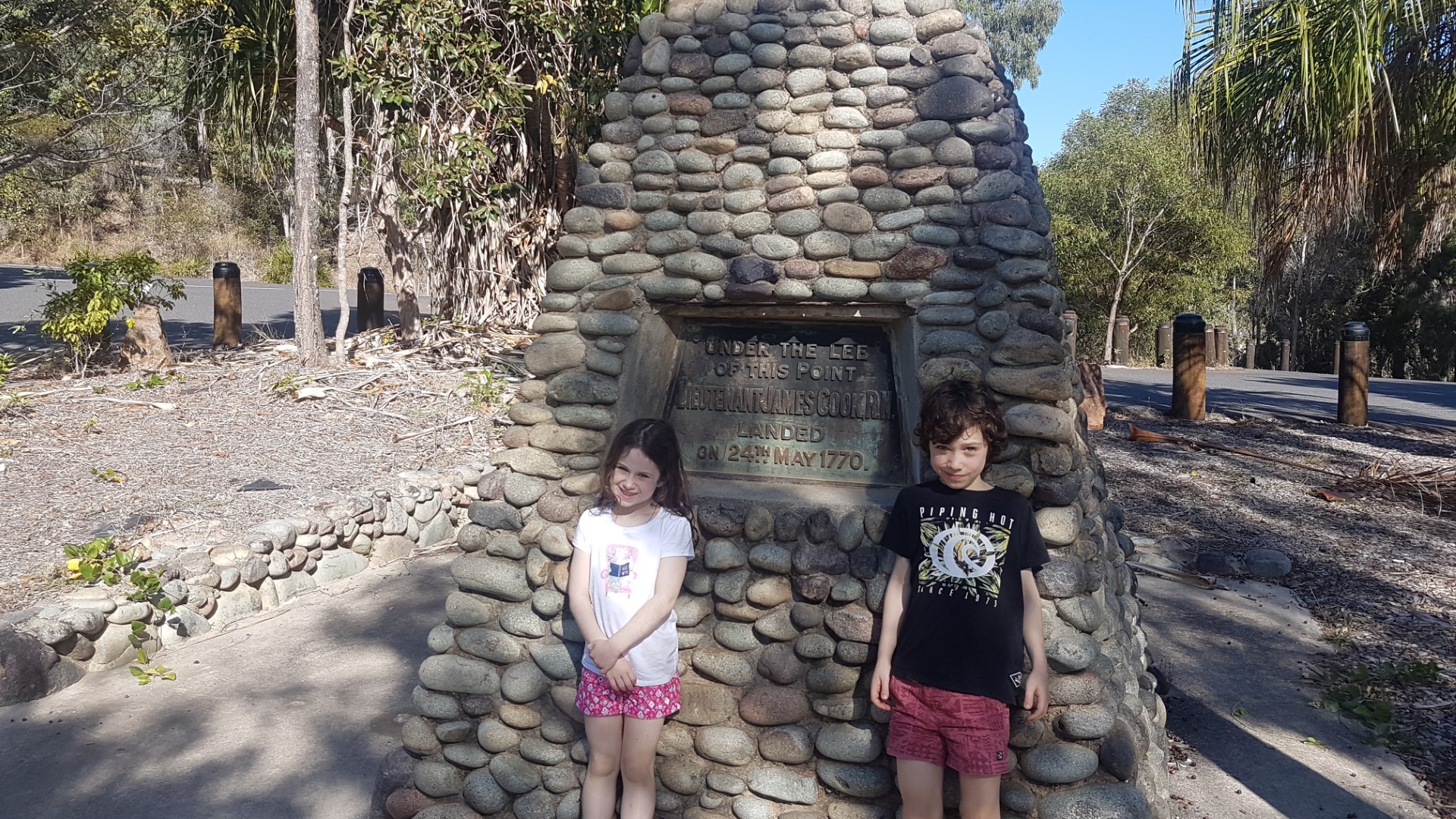 We got up a lot earlier than I would have ever voluntarily done at home. So after we collected our possessions that had been distributed around Justine’s mum’s place and had breakfast we were on the road just before 9, but not before the next door neighbour brought over a small turtle he just found in the corner of his garden. Justine’s mum is a huge greenie, so was happy to take it down to the local wetlands. At the time the turtle was not showing heaps of life, but we’ve since been assured it is alive and well.

END_OF_DOCUMENT_TOKEN_TO_BE_REPLACED 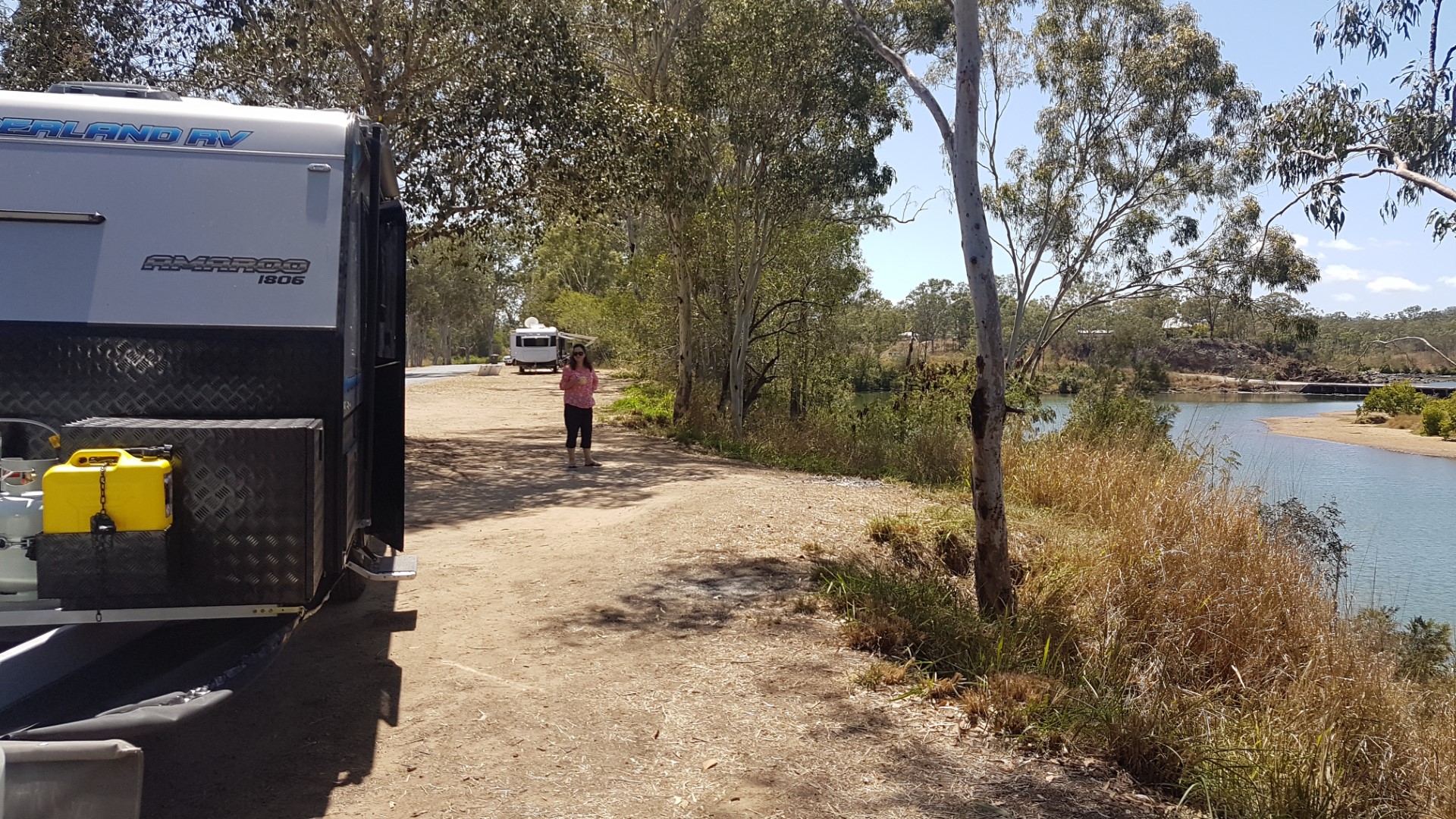 A slower start to today and we leave just after 9. We don’t plan on going too far, I’ve penciled in the Calliope River campground to test out our first free camping site. We arrive pretty early at 11:30 and decide we’ll pull up for lunch and work out if we will stay or if we’ll push on and find another campground further north.

END_OF_DOCUMENT_TOKEN_TO_BE_REPLACED 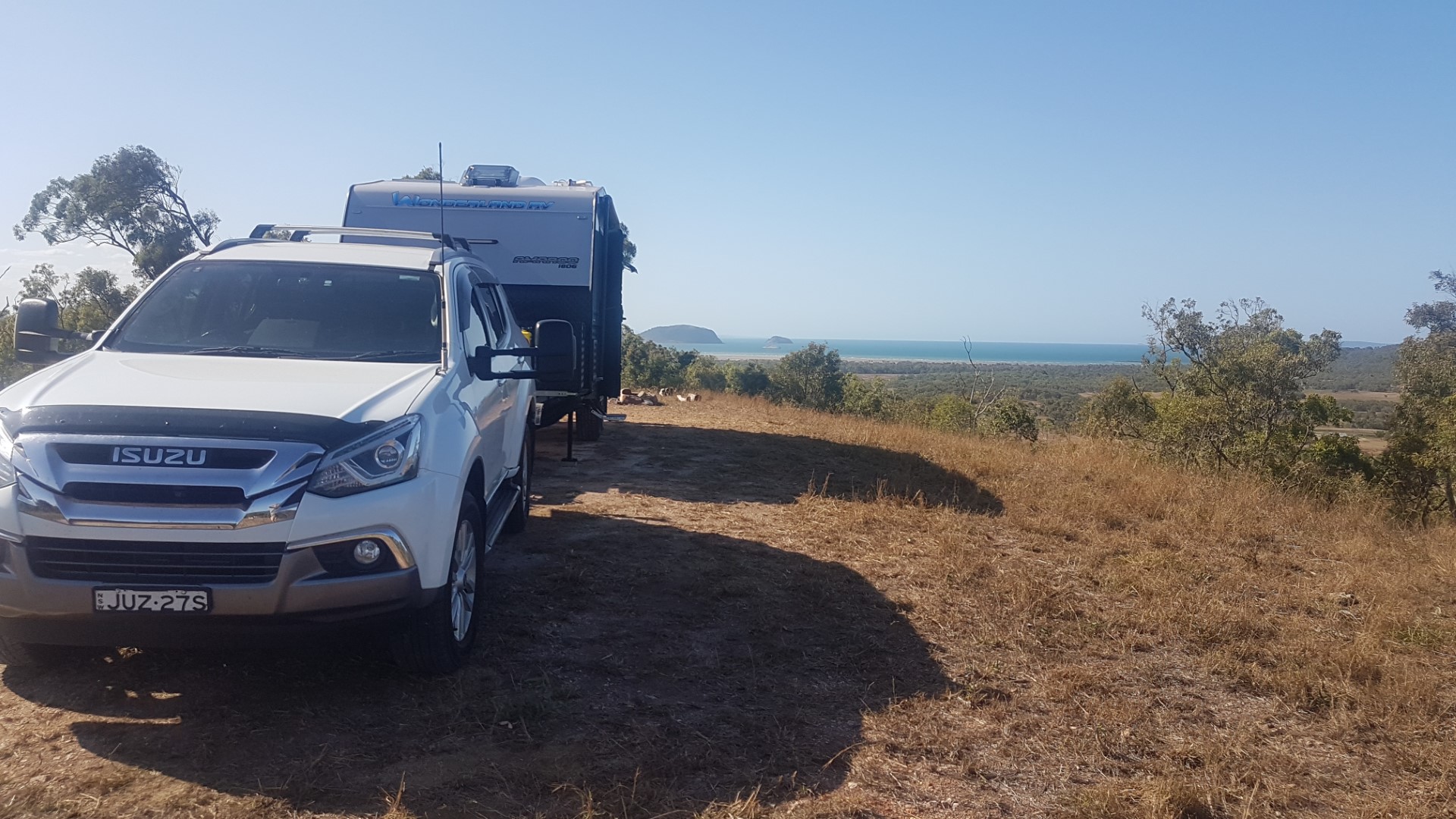 The camp is surprisingly quiet given the number of people here. Up and have breakfast, and we pack up slowly.

A guy came over yesterday to check out the solar panels we have out, he had a similar set, and said his were starting to scuff were they folded, but as this was the first time ours had actually been used, they were still in good nick. We meet him on the bridge later that afternoon and he assured us there were no crocs in the river, he was probably right, but I noticed he didn’t go for a swim either. Anyway he popped over this morning to ask if we where headed in the direction of Rockhampton, as a matter of fact we are. He told us about the free Rockhampton Zoo, and specifically how they have a Saltwater and Freshwater croc, side by side.

END_OF_DOCUMENT_TOKEN_TO_BE_REPLACED 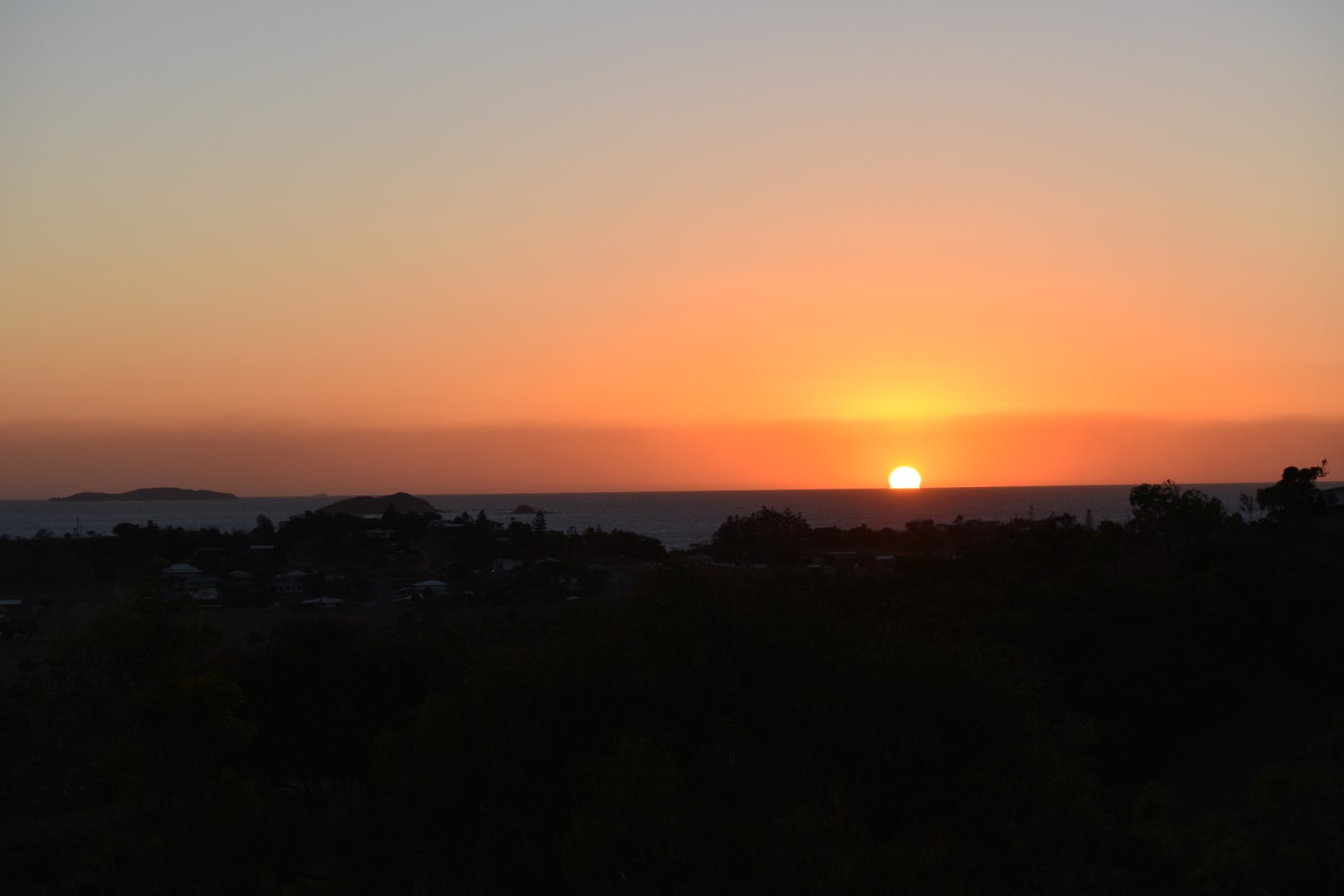 Up at 5:45 to see the sunrise, Liam is up with me. We saw a few in NZ, but it was great to see it rise over the islands this morning.

END_OF_DOCUMENT_TOKEN_TO_BE_REPLACED 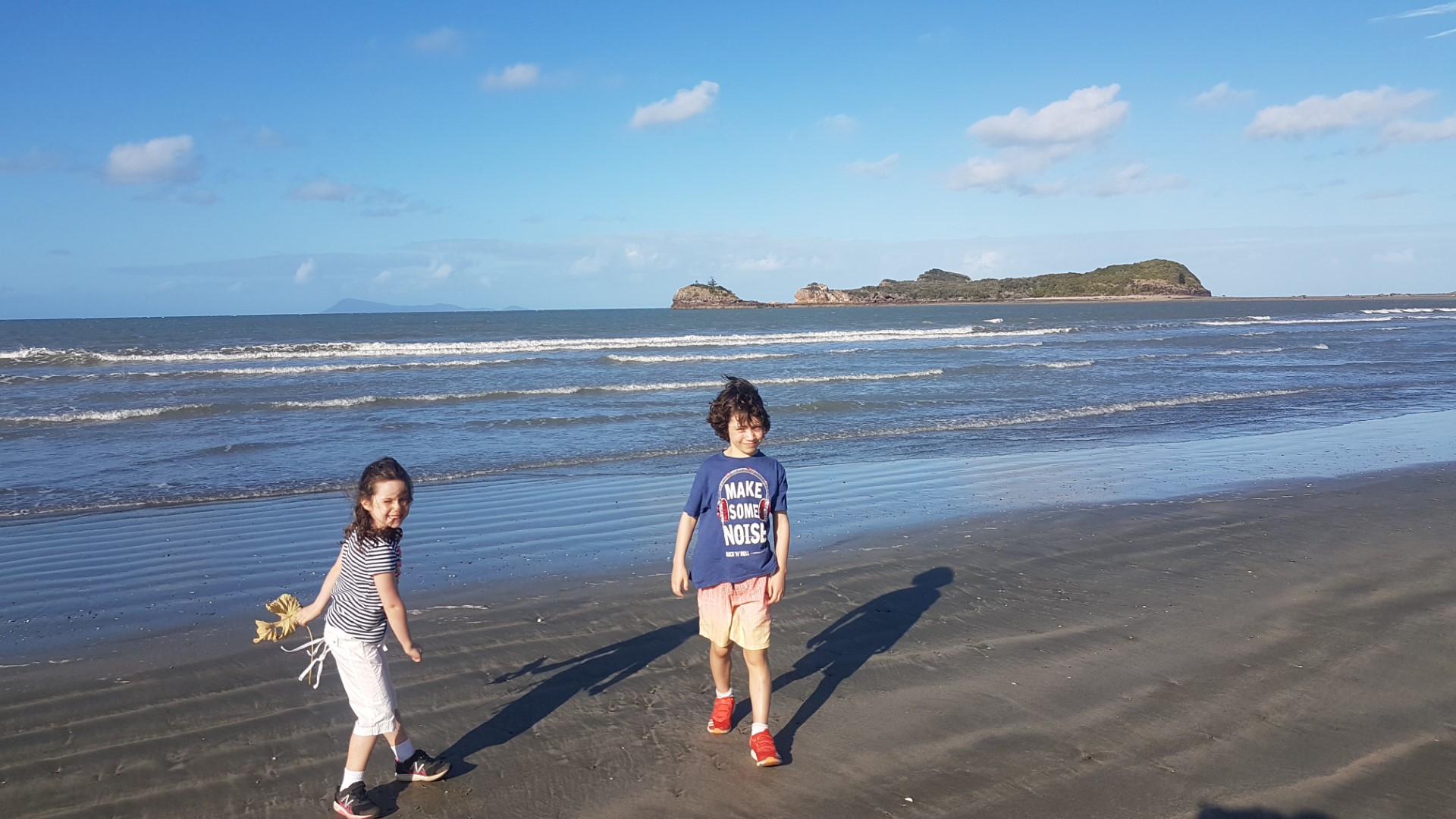 A relaxed and slow start to the day. We have planned to do the Sarina Sugar Shed tour at 11, and it is about an hour up the road, so no point in getting away too early. We make use of the shower, yes there is only 1, and pack and get ready to go. I must say for $10 this place was great to stay at.