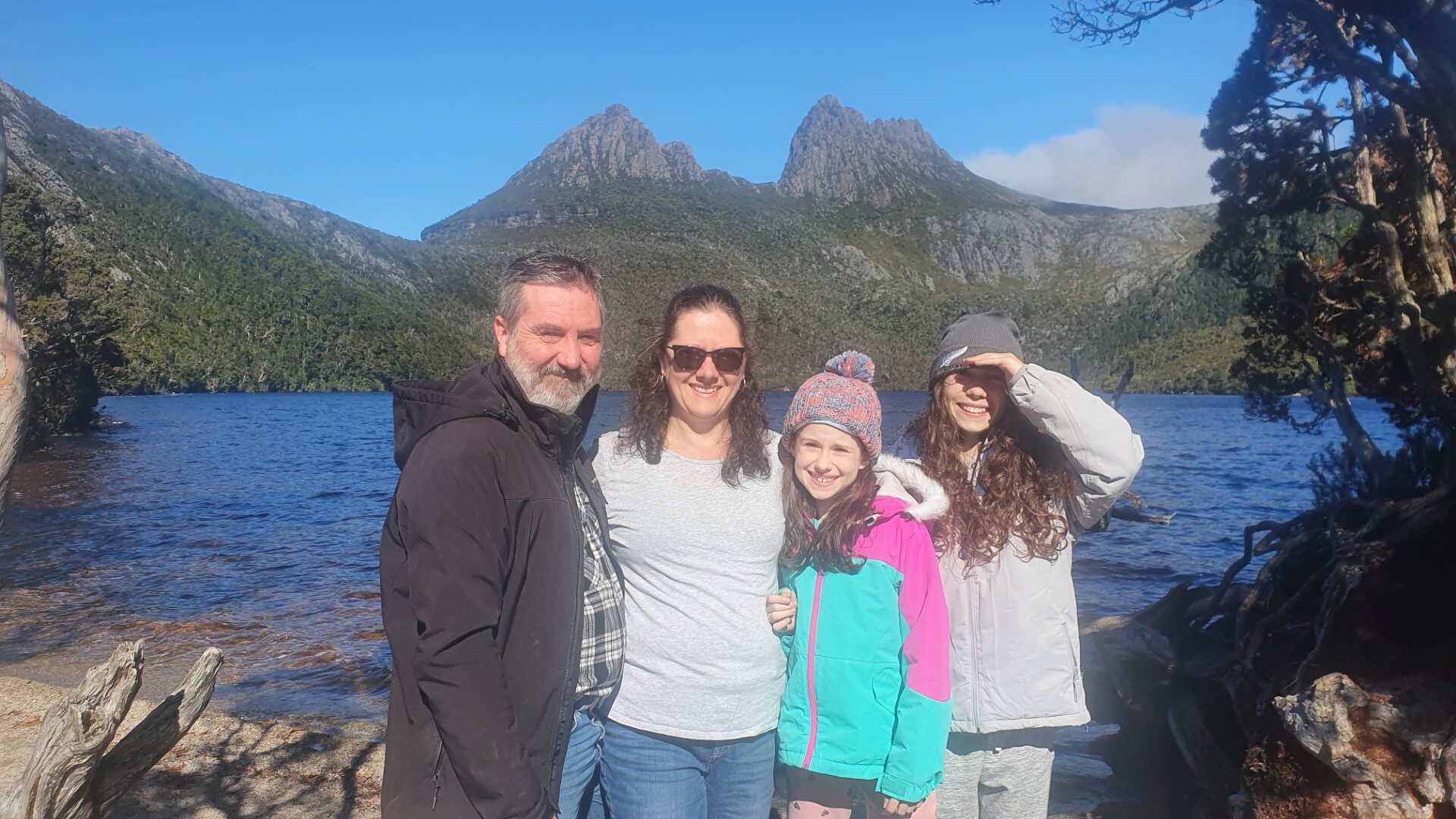 Did I mention cold?  We had the diesel heater running, albeit, on its lowest setting last night, and it was still fresh in the van.  At least the floor wasn’t freezing.  I would have hated to see what it would have been like had we not had it running.   I think it got down to about 1 or 2° overnight.

The main thing on today’s agenda is the Dove Lake Circuit, a 6km, 2-3hr walk so it’s not like it will take all day.  The buses start at 8, but we figure we’ll let the day walkers take the early buses.

Hot breakfast off the BBQ, and we finally wander into the Visitor’s Centre around 10ish.  We queue up for the bus, and of course it takes about 15-20mins for the next one to turn up.  At least were at the head of the long queue.

First, the bus stops at the Rangers station that we drove to last night.  Then onto a spot called Snake Hill. It’s the middle of the Cradle Valley board walk from the Rangers station to the next stop of Ronny Creek.  It seems Ronny Creek is the official start of the Overland Track and a few other longs walks, so a few serious looking bushwalkers with their huge backpacks get off here.  About 20min into the trip we drive into Dove Lake.

While cold, we’ve got an absolutely sensational day, in some respect you couldn’t ask to better.   Forecast of 15°, not a cloud in the sky and only light winds.

At the visitor centre yesterday. they asked, if we’re doing the whole circuit, then do walk clockwise for Covid reasons.

So, we start up the east side of the lake, heading south. After about 15min we see a turn off to Glacial Rock, do we take it or not?  In the end we do, and it’s about 20mtr to a lookout over of all things Glacial Rock….  How hard would it have been to put the distance on the sign?  Photos taken we attack the next leg.

About 15mins later we find this small point, it looks like a beach, but the sand is these small pebbles.  In the sun, out of the wind it is glorious, in the wind it is a lot fresher.

We continue down the east side, while not crowded, there are groups that are traveling at different speeds and on the narrow board walks we need to move over to make room for them to pass.  And although the recommendation is to travel in one direction, it seems not everyone got the memo.

See here for more details on the walk https://walkingmaps.com.au/walk/4244

We hit the southern end of the lake and the mountain looks completely different, the main image of the razorback ridge to the right and the point on the left almost seems to have reversed at this angle.  All along the profile of the mountain has changed, it kinda reminds me of the Uluru walk, But rather than the rock in the centre, here the rock is all around us and we and the lake are in the centre.  Along this side we’ve seen this the cloud that has been pouring over the ridge just adding to the grandeur.

We round the southern end and after a section of track that seems almost bolted onto the rock with some great views of the lake, we enter a green oasis called the Ballroom forest, so green, like last night’s walk.

A brief stop at this sandy (stony) cove and we make the final push.  We see people up at Marion’s Lookout, the place we walked to 20 years ago.  I can’t say I recall it being that high up, I’m not sure how we made it

From here the track heads overland, so it ends up being a steep climb and descent over the point.  It’s much harder than the rest of the walk so far so a couple of breaks are needed.

It’s getting warmer and warmer, so beanies and jackets are starting to come off.

On the final stretch is the boat house, one of those instantly recognisable moments, so of course everyone wants the photo or Instagram shot.  Most people are being really good about it and jump in for their shot and get out of the way, but some old woman and a Japanese woman, separately just pose to get the best image the can.

Final leg and we’re back at the bus stop.  A minute or so later the bus arrives and we’re on our way back.

We drive back to the van to rest up for a bit.  We overheard on the bus a family that got on at Snake Hill talking about all the wombats they saw, we think about catching the bus back to there and walk around for a bit, but we just don’t get organised in time to make it.

Later, we drive back to the Rangers Station and take the short walk to Kynvet falls, and the short detour to Pencil Pine falls, the later was much easier to get to, and much better to look at.

As usual (as it now seems) there are a few Wombats out feeding, so it seems they are not that hard to spot.  While it’s getting late, and maybe a bit too dark, we try the Enchanted walk one more time in hope of spotting a Platypus.  It is too dark to really see into the water, but as we’re making our way back to the car, there is the Wombat, only a couple of metres off the track.   I’ve mentioned to Justine, all these animals we’ve seen in the wild are active and feeding or doing something, unlike when you see them in the zoo, where in most cases they look like they’re in a coma.

Back to the van for dinner.  It will be another cold night.  We do hear a bit of noise in the bush, but it’s just a Brush Tailed Possum, hell we get those at home!