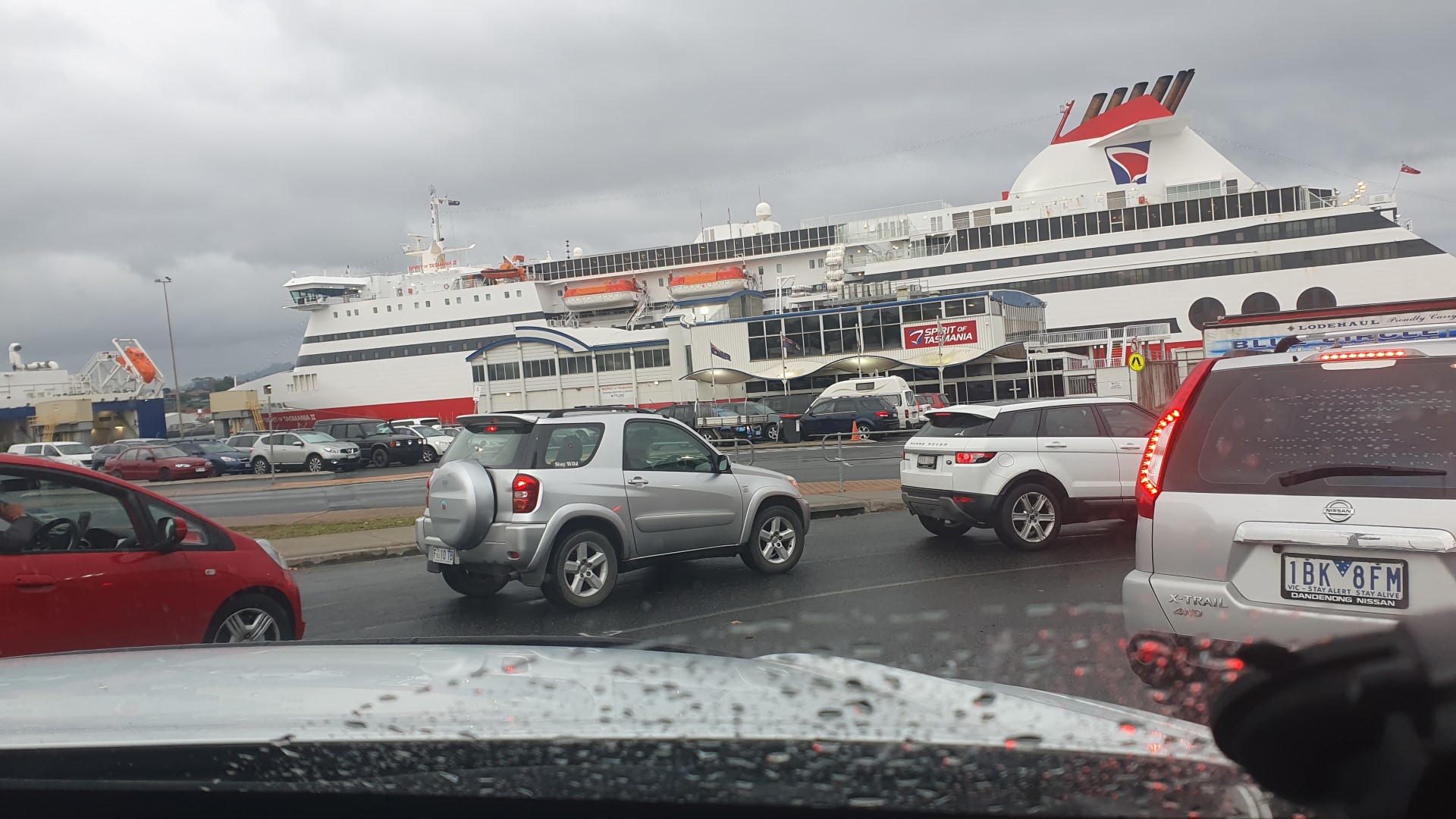 Up and final packup.  I drop Justine and the kids off at the Airport at 8:30, and head back and get myself ready and hitch up the van.   I’m heading to a rest stop about 20km this side of Devonport to wait it out till the 5pm boarding.  Although I might not try to make it so early this time if we’re going to be loaded last again.

On the main highway north, I start to see a number of race cars and their support vehicles, Targa Tasmania started yesterday around Georgetown, but today they seem to be north of Launceston.  Looks like so much fun.

I start to see the support vehicles in most pull over spots, so start to think the rest area might be full.  As I arrive, there are cars, but not rally ones, but it seems a bit close to the road and will be noisy.  I had spotted a rest area, not far from where the ferry leaves from so I think I might give that a try.

20min later I pull into a park on the Devonport foreshore.  The parking area is big enough that I can pull over and not be in anyone’s way.   A great view out over Bass Straight.  A much better option.   The water looks so calm, I hope this is a good omen for tonight’s crossing.

Around 3pm it starts to rain, but that’s fine.   Just a reminder of what great weather we’ve ended up having on this trip.

As the afternoon wears on a number of campervans and the like pull in and then leave.  Oddly in addition to toilets, there is hot shower in the park.  Not sure why the council would encourage campervans here like that.

Unlike Melbourne, you’re meant to be able to park at the Devonport Terminal.  I think the view’s better here so stay until the 5pm boarding process.

About 4:30 a family pulls up, they’re towing one of those really small campers.  We have a bit of a chat, as he’s thinking about buying a MUX.   He’s just washed his rig, mainly to get rid of the mud and asked what I plan to do.  I’m thinking ours is more dirt, than actually covered in mud. So I hope I’ll be OK.  I think the concern is more about bringing stuff into Tas, than taking it out.

Figuring it’s time, we both drive out and over to the ferry.  There seem to be two lines, I jump in one.  About 15mins later they start to move.  I get 100mts or so further down and see a sign indicating large vehicles to be in the left lane, of course I’m in the right.   The road, not only U turns, its worse.  I can see this will be a problem and swing out as far as I can without going into the left hand lane, but as I edge forward I can see I’m not going to make it and the van is going to hit the gatepost.   Around this time the staff see my issue.   Fortunately, the other van is in the lane next to me, so after we let a couple of cars though I can move over into the left lane and just make it.

Boarding pass collected, I wait with all the oversized vans, the cars start loading and then surprisingly we start to board, so no waiting till the end here.  This time I’m second in line.   As expected, we’re boarding from the rear, so should disembark from the front in Melbourne.

A few phone calls, and then knowing the ropes a little better, I grab dinner pretty early while we’re still docked, while the seas are calm, we won’t have the protection of Port Philip Bay here.

At 7:30 they undock, and motor a few 100mts further down the Mersey.  Then they rotate the boat 180°, boy does that look tight, and it’s not long till we waving goodbye to Devonport and Tasmania.

The seas are calmer than the first crossing, so I try and get some sleep.