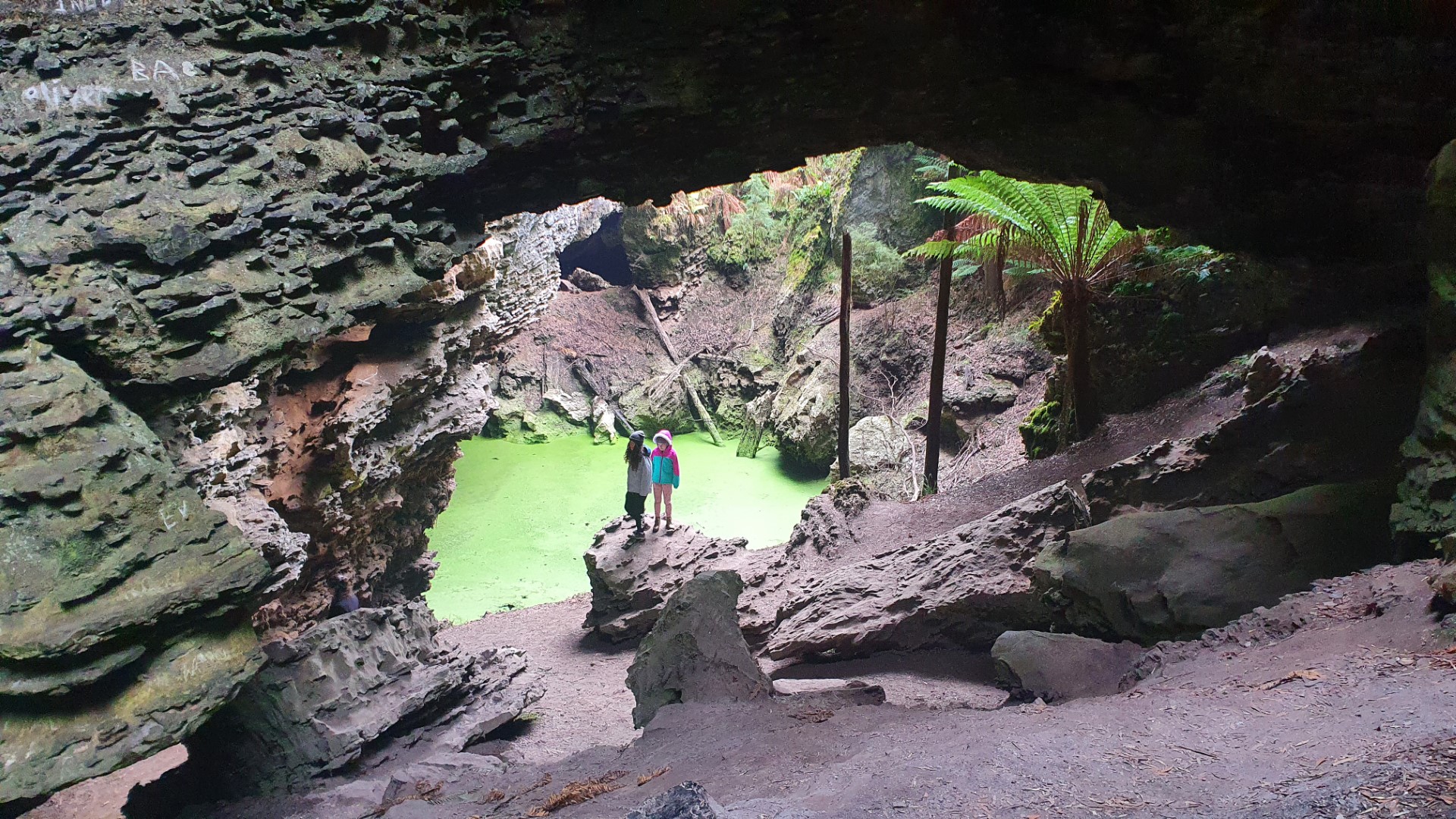 What a different day, overnight was really warm, almost hot in the van and this morning is overcast.

Up and breakfast, and at about 8:45 we walk up to the centre of town.   Right on 9, to the sound of a couple of marching drummers, a parade of about a dozen veterans, and a bunch of school kids walk down the main street.

A short but moving ceremony, with a few speeches, the National Anthems, and the community and individuals had about a dozen or so wreaths to lay.  All over in about 30mins.   There would have been 50 or so onlookers, maybe a few more.

We discussed last night, without much concrete plans, visiting some of the Tarkine Forest area. So again, without any planning, I see a place highlighted on the map called Trowutta Arch.  The photo looks impressive, so we jump in the car and start heading out of town.

The map suggests about 45mins or so.  and we’re soon driving through what looks to be good farming country.  We then hit the tree plantations and finally hit the dirt road down to the walk.  There are 5 or 6 cars here, which is a little surprising, seeing how few we’ve seen on the road. It seems only to be about 500mts down to the arch.   The rainforest is again just amazing, and they are all that little different.   Here a number of trees seem to have their root system start well above ground level.

We arrive at the arch, and WOW, while we’d seen photos, this was so unexpected.  It’s magical (or some may say “Majestical”)

After a few minutes the large family group already here start heading back, so we have the place to ourselves for 5-10mins.   A local elderly lady, who must be bringing some visitors, mentions to Justine that the green moss that is covering the pool is unusual and normally the water is clear and you can see, if not to the bottom at least some distance into the water.   It looks pretty sensational as it is, so I’ll take it this way.

She mentions that the water here flows underground from a place called Lake Chisholm, so we take a drive over there.  Again a great 500mt or so rainforest walk, unfortunately, while nice, the payoff is not anywhere near as good as the arch.

Seeing we’ve come this far, I want to go and see Arthur River, it was going to on our list, until we found out the small ferry that is located on this west coast road from Strahan to Arthur River.  So small it would not have taken the van on it.

We drive into this small hamlet, and Justine spots on the map, the takeway store on the other side of the river.   The bridge is long and only single lane, we realise a little later, there is no dedicated pedestrian access, so we’re not sure how walkers are meant to cross the river.   We nearly drive by the “take away” store, it’s in a building smaller than a toilet block.  In any other case we might drive by, but it’s late we’re all hungry and in my haste to get away this morning we haven’t pack any provisions.  We order and while waiting we get talking to a young family who are from, of all places, Arnhem Land?  “Feeling the cold much?” I ask.

We collect our food, and drive back over the bridge to the river heads, called the “end of the world”, not for any particular reason, other than it seems some bloke called it this once.  In the end the food was pretty good!   The view here is great, and there’s actually some surf rolling in.  What’s also amazing is all the driftwood, every surface of rock seems to have piles of driftwood on it.

Justine takes over the driving and get us back into Stanley.  I have to say the roads here are living up to expectations, not sure you’d call this a highway in any other state.   On the way into Stanley we pass one of these life size photo frame for people to take Instagram shots, and recall there was meant to be one in Stanley overlooking the Nut, we take a punt on where it should be, and get a photo.

We arrive home about 4, so a much longer day that we’d expected.  We make some more concrete plans for tomorrow.  From here to Launceston is going to close to 3 hours of driving so we won’t have a lot of time to waste.

We pop out just after 6 to see if there are any penguins, we can’t find any, and talking to an older couple, it seems we’re too early.  They advise us you can see them all night once they arrive.   Pizzas for dinner then around 8, we venture out again.  Immediately we see two nestled in the rocks, then another one up a metre to so up.  We thought they cross the rocks and nested in the grass, but it seems they nest in the rocks too.   All up we end up seeing about 5 of them, a couple of potoroos and a rabbit.  So not a bad night spotting.