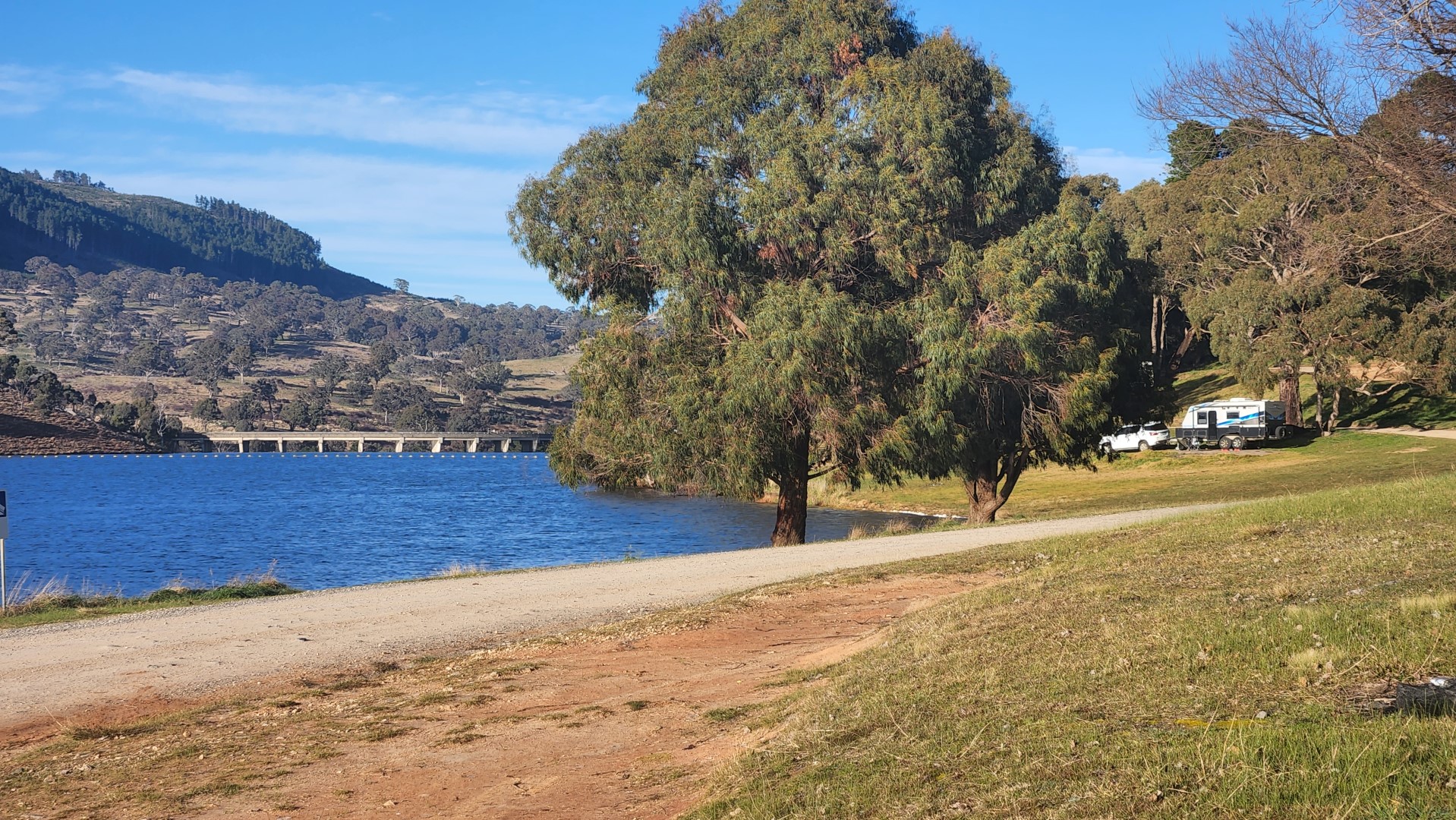 Bit of an unusual post, not really a holiday, just a couple of days off.  The family is at home and it’s just me taking a break after working a few recent weekends.

I finished the pharmacy move here in Orange last night, so I don’t need to head back in there this morning.  There is a dam south of here that I want to go to, so I’m in not in any super rush to get going this morning.  Speaking of morning, like yesterday is damn fresh, with close to 0° overnight.

So around 9:30 I pull out and start heading east.  It’s only about 50km from here to the freecamp at Carcoar Dam.  Through Lucknow on the highway and then head south through Millthorpe and Blayney.  Millthorpe is quite a historic town, and Blayney is larger than I expected.

Around 10:30 I arrive at the dam.  It’s pretty quickly apparent that there are not too many level sites with good views of the water, and those that are here are all taken.

At the end of the main open campground, there is a narrow track ahead that leads around the water.   I decide to pull over and take a walk rather than risking needing to reverse out.   As I’m walking this lady camped up with a large group asks if I’d like their spot, they’re just packing up and leaving in half an hour or so.   Well, this spot is what seems to be the only concrete pad with perfect views over the water.  “Yes, as a matter of fact I would like that spot, thanks!”    I still need the ramps to get completely level, but this is the score of the spots here, so it ended up being perfect timing.  Oh and there was nothing better down the track either.

The weather is sensational.  Sunny, warm and not too much wind.  I’d been warned that it can get really windy here.

After setting up I take a walk around the campgrounds, there are probably a dozen groups that appear to be here for the day with little tinnies or fishing from the banks and maybe 5 or more camping.   I get talking to a bloke who’s packing up a slide on camper to head home to Bathurst.   He said Friday night had been super windy and made mention that the wind farm on the opposite bank could get noisy, but if they didn’t run it Friday then it must not be being used much anymore.  He also said the dam was pretty green with Algae, earlier in the year, but all the rain has flushed it clean.

Later in the afternoon, I walk the 1.5 odd km though the campground then on the roadway to the Dam wall.  The dam wall is a little larger than I expected and boy is the Dam 100% full now, all the spillways are running a little bit.

One by one the day-trippers pack-up and that leaves a couple of campervans and what looks like three almost permanent vans, two of them seem almost abandoned, but early evening I see a car pull up at the third one that has firewood stack and the clothesline outside

Looking around today, the camp area does not look quite a big as it seems when looking on Google maps. Then I realise the images from google maps, was when the water level was so much lower. That make sense why there is a set of 4×4 tracks just leading into the water. The water wasn’t there a year or two back 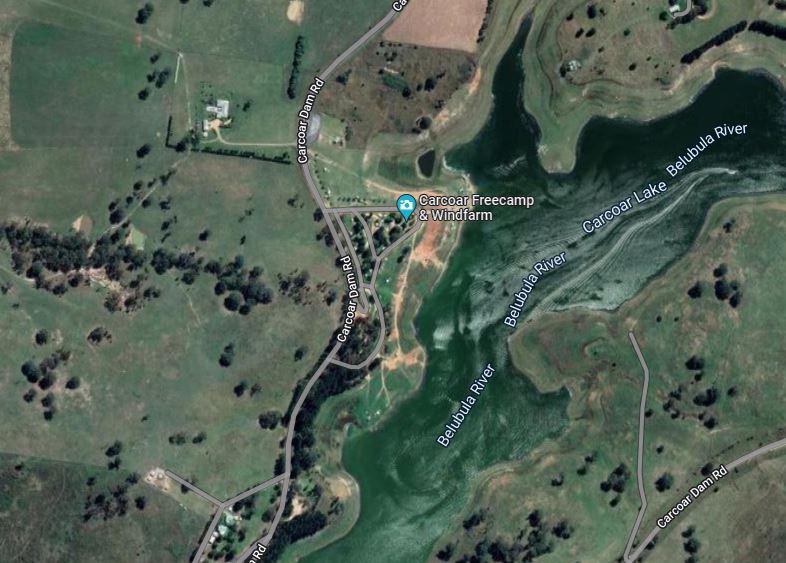 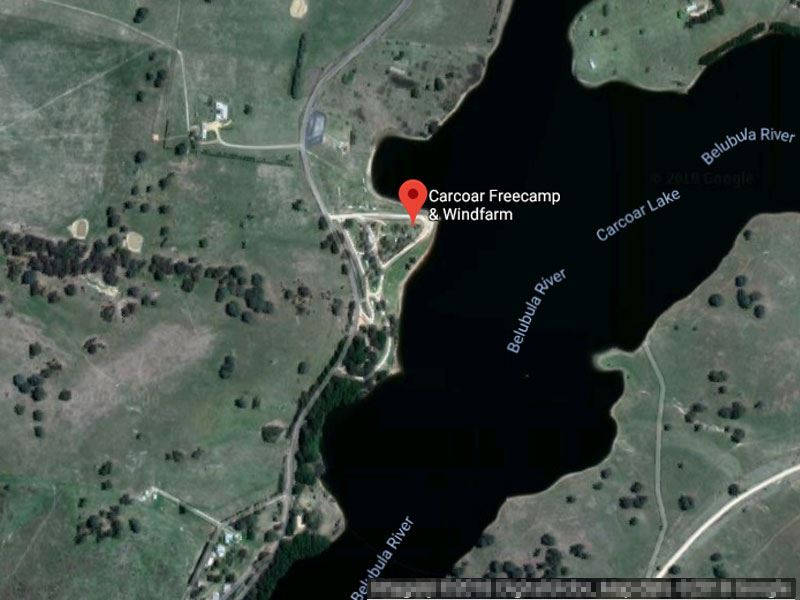 I get an early fire started, boy I miss these.  While it’s cold, it’s nowhere near as freezing as I was expecting.  The fire is warm and the lack of wind is helping.

I do start up the diesel heater as it’s starting to get damn chilly in the van.

Out the corner of my eye I see a movement, this small black cat is wandering around the campground, while I’m assuming it wild, it hardly looks feral, it seem well groom and is pretty timid.

Another near zero night, but with the heater running all night its toasty warm in the van.  As the sun starts to rise it’s not super cold outside.

After Coffee and breakfast another walk around the camp site.

At 10, I take a drive, over the dam wall and take the scenic route to Carcoar.   The view from the wind farm on the other size of the dam back to the campgrounds is great.  Mount Macquarie Road, south of the dam, through the state forest ends up being a bit of a goat track, but that’s OK.  Here I see a fox cross the road in front of me, obviously it seems pretty good at avoiding the 1080 baits the signs say are laid here.   Into Carcoar and its’ pretty quiet here on a Monday Morning.   It feels a bit like Sofala, maybe not quite as rundown.

Form here into Blayney. I fill up with fuel ready for tomorrow and can’t resist a Steak and Onion pie from Ryan’s bakery.

Finally complete the loop and back in via the dam wall.

It’s so much quieter here today than it was yesterday.

I take another walk to the dam, as much for a bit of exercise as anything else.

Late afternoon some grey nomads in another van turns up and sets up, not far from me, in-between me and a van that turned up earlier in the day.   After a while the bloke comes over to say g’day and have a look at the fire I’ve just started.   He mentioned they had been staying up in plateau around Oberon, but with the rain and cold temperatures coming thought it best to find somewhere a little safer.

I had thought the wind farm blades must have been locked, but now I can see them moving ever so slowly, surely not enough to generate and electricity.  So I’m a bit stumped about if the farm is active or not.

As dusk approaches, I see the cat again, and this time a few bunnies too.  Around this time something quite surprising happens, a flatbed tow truck turns up and they start to load the most derelict looking of the three permanent vans.  If you’d ask me I would have said the thing had been here for months or years, but now I’m not so sure.  Anyway about 30mins later they drive out with the van on the flatbed. 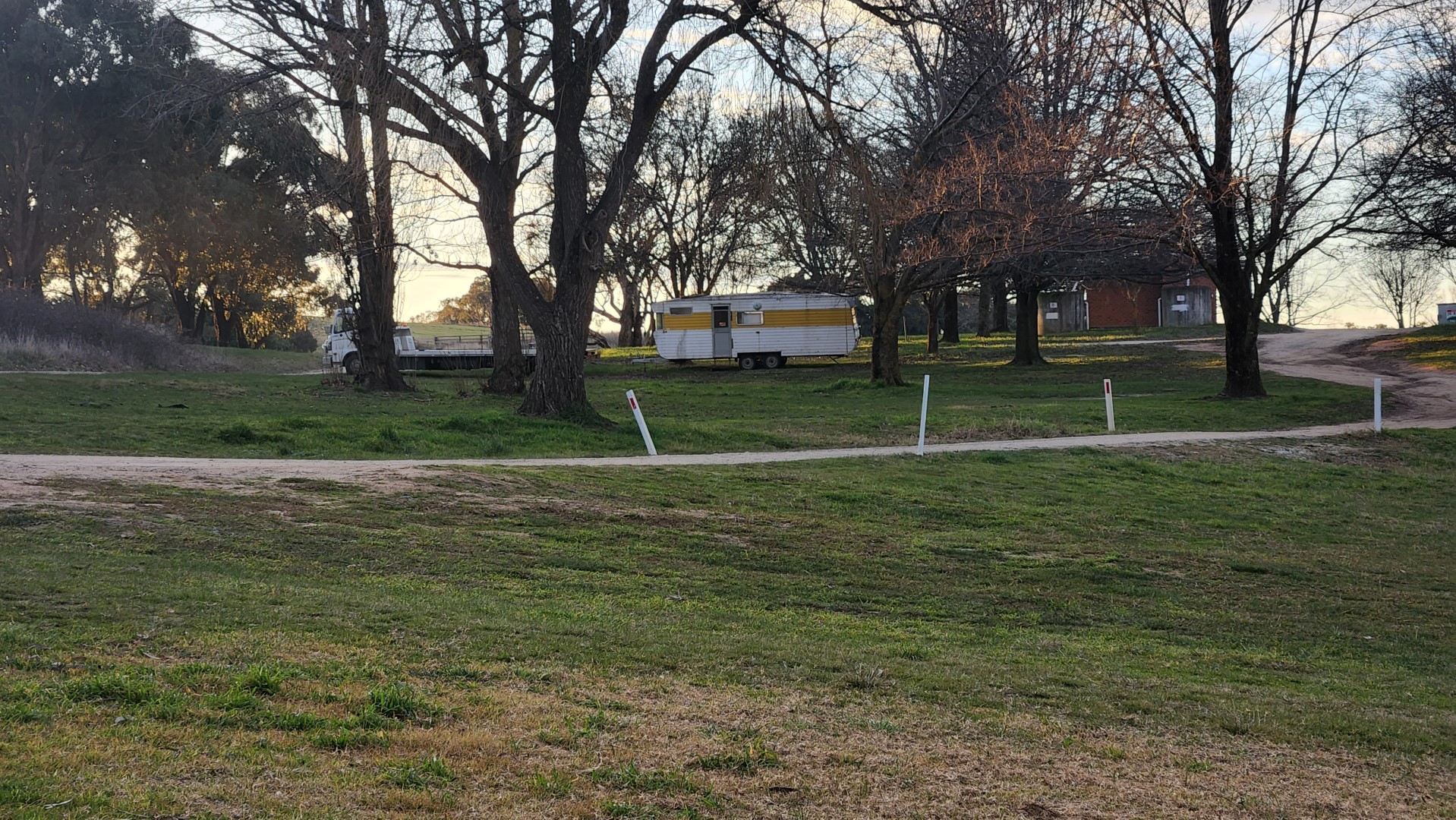 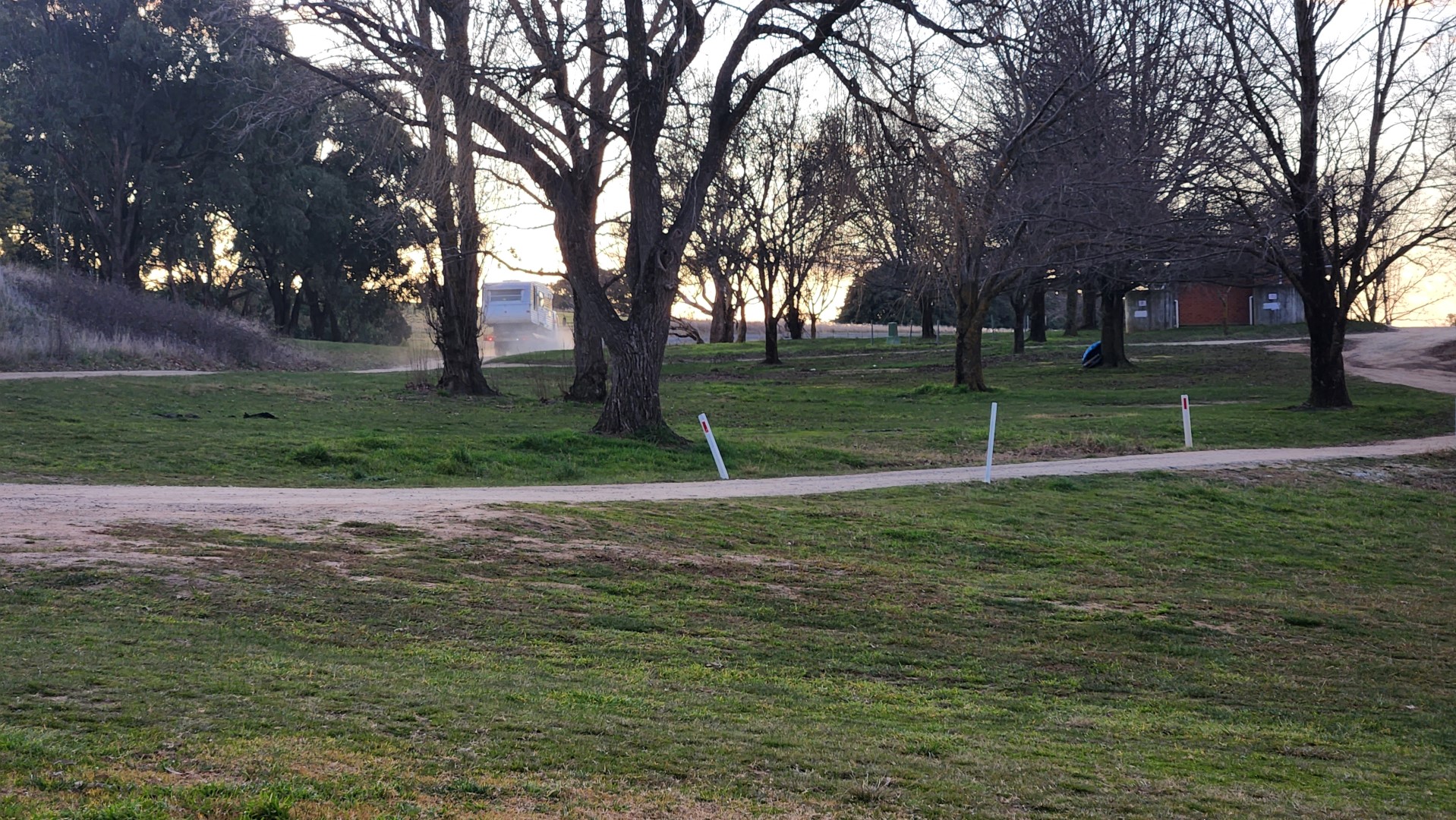 There are quite a few birds around and I see this hawk circling the lake and make a couple of strikes into the water,  I can’t see that it got anything, and other birds seem to be attacking it so it eventually seems to give up.

At around 8pm, the fire has pretty much finished and the cold is starting to set in, so time to call it a night.

It rained pretty heavy overnight, it still drizzling and it’s a cold morning with a low fog around.  I can’t even see the wind turbines on the hill.

Under normal circumstances, I would have put the awning out and be protected from the rain, but then I’d need to roll it up wet for the trip home.

I can tell you, on mornings like this, there is little motivation to go outside.  Particularly with the heater still running and the van being nice and warm.

The plan had been to hang around till lunch time and then head home, but there does not seem much point sitting here inside.   So I decide to take the scenic route home via a couple of other camp sites I thought might have been suitable.  Chifley Dam, just outside of Bathurst and Oberon dam, as you guessed not far from Oberon.

So I finish the packup, fortunately the heavy rain has stopped and I’m not too wet.

Chifley is nice, but the smallish camping area is a few hundred meters away from the dam without any view of the water.  With that, and the no fires signs, I’m glad I didn’t plan to come here.

Oberon is nicer, and at 1100mtrs quite a few degrees cooler.  The camping spots are all spread out though the bush so some have views other not.  Reminds me a little bit of three mile dam at Mt Selwyn. Again Carcoar is the best of the three.

Finally back on the great western highway. Over the mountains and home.    Given the route I’ve taken the drive was a bit harder than I had originally thought, so I’m a bit stuff by the time I arrive.

All in All, still a good couple of nights away.

One Reply to “Carcoar Dam”